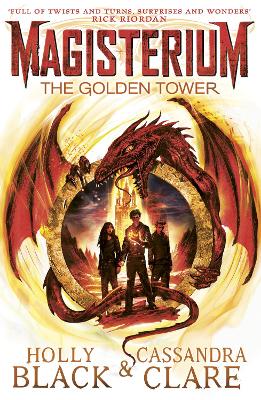 The final, thrilling instalment in this extraordinary series from bestselling authors Holly Black and Cassandra Clare.A generation ago, powerful mage Constantine Madden came close to achieving what no magician had ever achieved- the ability to bring back the dead. He didn't succeed . . . but he did find a way to keep himself alive, inside a young child named Callum Hunt.Facing up to what he is, Callum has battled chaos and evil across four years of magical training at the Magisterium, eventually defeating the armies of chaos in an epic battle.It came at a cost.Now, triumphant and heartbroken, Callum Hunt has just about had enough, and is ready to complete his training. But the evil Callum faced has not given up just yet . . .

» Have you read this book? We'd like to know what you think about it - write a review about Magisterium: The Golden Tower book by Holly Black and you'll earn 50c in Boomerang Bucks loyalty dollars (you must be a Boomerang Books Account Holder - it's free to sign up and there are great benefits!)

Cassandra Clare (Author) Cassandra Clare is the author of the #1 New York Times, USA TODAY, Wall Street Journal, and Publishers Weekly bestselling Mortal Instruments series, The Infernal Devices trilogy, and The Bane Chronicles. Her books have more than 30 million copies in print worldwide and have been translated into more than thirty-five languages. Cassandra lives in western Massachusetts. Visit her at CassandraClare.com. Learn more about the world of the Shadowhunters at Shadowhunters.com. Holly Black (Author) Holly Black is the bestselling author of contemporary fantasy novels for teens and children, including Tithe: A Modern Faerie Tale and the #1 New York Times bestselling Spiderwick series. She has been a finalist for the Mythopoeic Award and the Eisner Award, and the recipient of the Andre Norton Award. Holly lives in Massachusetts with her husband, Theo, in a house with a secret library. Her website is www.blackholly.com.

Arthur Spiderwick's Field Guide To The Fantastical World Around You
$31.99 $39.99