Victoria, Albert and the Death That Changed the Monarchy

'Rappaport uses new sources to give a vivid account of Albert's death . . . a valuable and insightful book which will change our view of Queen Victoria.' Spectator

When Queen Victoria's husband, Prince Albert, died in December 1861 the nation was paralysed with grief.

His death was a catastrophe for Victoria, who not only adored her husband but had, through twenty-one years of marriage, utterly relied on him- as companion, father of their children, friend, confidant, and unofficial private secretary. Without Albert to guide and support her, the Queen retreated into a state of pathological grief which nobody could penetrate and few understood.

Drawing widely on contemporary letters, diaries and memoirs, Rappaport brings new light to bear on the causes of Albert's death and tracks Victoria's mission to commemorate her husband in perpetuity. Richly compelling, this is the story of a magnificent obsession that even death could not sever. 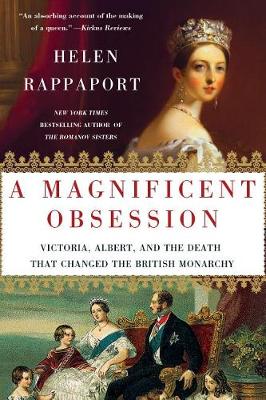 » Have you read this book? We'd like to know what you think about it - write a review about Magnificent Obsession book by Helen Rappaport and you'll earn 50c in Boomerang Bucks loyalty dollars (you must be a Boomerang Books Account Holder - it's free to sign up and there are great benefits!)

Helen Rappaport is an historian and Russianist with a specialism in the Victorians and revolutionary Russia. She has contributed to a three part BBC Two documentary on Queen Victoria, Queen Victoria's Children, to be screened in January 2013. Her books include Ekaterinburg- The Last Days of the Romanovs and No Place for Ladies- The Untold Story of Women in the Crimean War. She lives in Oxford. For more information, you can visit her website at www.helenrappaport.com

A Preview for this title is currently not available.
More Books By Helen Rappaport
View All

The Race to Save the Romanovs: The Truth Behind the Secret Plans to Rescue Russia's Imperial Family
$19.99 $24.99