The Mahabharata, originally composed some two thousand years ago is an epic masterpiece, "a hundred times more interesting" than the Iliad and the Odyssey (Wendy Doniger), it is a timeless work that evokes a world of myth, passion and warfare while exploring eternal questions of duty, love and spiritual freedom. A seminal Hindu text, it is one of the most important and influential works in the history of world civilisation.

This new English retelling, innovatively composed in blank verse, covers all the books of the Mahabharata. It masterfully captures the beauty, excitement and profundity of the original Sanskrit poem as well as its magnificent architecture and extraordinary scope.

Other Editions - Mahabharata by Carole Satyamurti 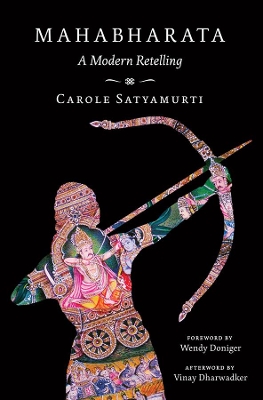 » Have you read this book? We'd like to know what you think about it - write a review about Mahabharata book by Carole Satyamurti and you'll earn 50c in Boomerang Bucks loyalty dollars (you must be a Boomerang Books Account Holder - it's free to sign up and there are great benefits!)

Carol Satyamurti is a poet, sociologist, and translator. The author of many books of poetry, she has taught regularly for the Arvon Foundation and for the Poetry Society (UK). She lives in London. Wendy Doniger (Ph.D. Harvard University) is Mircea Eliade Distinguished Service Professor of the History of Religions at the University of Chicago. She first trained as a dancer under George Balanchine and Martha Graham and then went on to complete two doctorates in Sanskrit and Indian Studies (from Harvard and Oxford). She has taught at Harvard, Oxford, the School of Oriental and African Studies at the University of London, and the University of California at Berkeley. In 1984 she was elected president of the American Academy of Religion, in 1989 a fellow of the American Academy of Arts and Sciences, in 1996 a member of the American Philosophical Society, and in 1997 president of the Association for Asian Studies. She has been awarded seven honorary degrees, and her book The Hindus: An Alternative History was a finalist for the National Book Critics Circle Award. Vinay Dharwadker (University of Wisconsin-Madison) is the author of Cosmopolitan Geographies: New Locations in Literature and Culture (2001) and a book of poetry, Sunday at the Lodi Gardens: Poems (1994). He is the editor of The Oxford Anthology of Modern Indian Poetry (1994) and The Collected Essays of A. K. Ramanujan (1999), and the translator of a collection of Kabir's work called Kabir: The Weaver's Songs (2003).