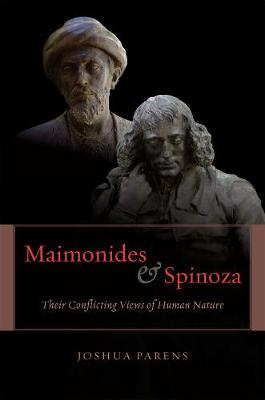 Their Conflicting Views of Human Nature

Until the last century, it was generally agreed that Maimonides was a great defender of Judaism, and Spinoza-as an Enlightenment advocate for secularization-among its key opponents. However, a new scholarly consensus has recently emerged that the teachings of the two philosophers were in fact much closer than was previously thought. In his perceptive new book, Joshua Parens sets out to challenge the now predominant view of Maimonides as a protomodern forerunner to Spinoza-and to show that a chief reason to read Maimonides is in fact to gain distance from our progressively secularized worldview.

Turning the focus from Spinoza's oft-analyzed Theologico-Political Treatise, this book has at its heart a nuanced analysis of his theory of human nature in the Ethics. Viewing this work in contrast to Maimonides's Guide of the Perplexed, it makes clear that Spinoza can no longer be thought of as the founder of modern Jewish identity, nor should Maimonides be thought of as having paved the way for a modern secular worldview. Maimonides and Spinoza dramatically revises our understanding of both philosophers.

» Have you read this book? We'd like to know what you think about it - write a review about Maimonides and Spinoza book by Joshua Parens and you'll earn 50c in Boomerang Bucks loyalty dollars (you must be a Boomerang Books Account Holder - it's free to sign up and there are great benefits!)

Joshua Parens is professor in and graduate director of the Department of Philosophy at the University of Dallas. He is the author of An Islamic Philosophy of Virtuous Religions and coeditor of the second edition of Medieval Political Philosophy: A Sourcebook.

A Preview for this title is currently not available.
More Books By Joshua Parens
View All