This book demonstrates the political potential of mainstream theatre in the US at the end of the twentieth century, tracing ideological change over time in the reception of US mainstream plays taking HIV/AIDS as their topic from 1985 to 2000. This is the first study to combine the topics of the politics of performance, LGBT theatre, and mainstream theatre's political potential, a juxtaposition that shows how radical ideas become mainstream, that is, how the dominant ideology changes. Using materialist semiotics and extensive archival research, Juntunen delineates the cultural history of four pivotal productions from that period-Larry Kramer's The Normal Heart (1985), Tony Kushner's Angels in America (1992), Jonathan Larson's Rent (1996), and Moises Kaufman's The Laramie Project (2000). Examining the connection between AIDS, mainstream theatre, and the media reveals key systems at work in ideological change over time during a deadly epidemic whose effects changed the nation forever. Employing media theory alongside nationalism studies and utilizing dozens of reviews for each case study, the volume demonstrates that reviews are valuable evidence of how a production was hailed by society's ideological gatekeepers. Mixing this new use of reviews alongside textual analysis and material study-such as the theaters' locations, architectures, merchandise, program notes, and advertising-creates an uncommonly rich description of these productions and their ideological effects. This book will be of interest to scholars and students of theatre, politics, media studies, queer theory, and US history, and to those with an interest in gay civil rights, one of the most successful social movements of the late twentieth century. 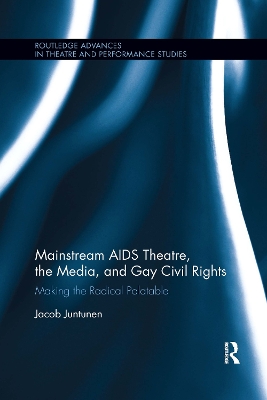 » Have you read this book? We'd like to know what you think about it - write a review about Mainstream AIDS Theatre, the Media, and Gay Civil Rights book by Jacob Juntunen and you'll earn 50c in Boomerang Bucks loyalty dollars (you must be a Boomerang Books Account Holder - it's free to sign up and there are great benefits!)

Jacob Juntunen is Associate Professor in the Department of Theater and in the Women's, Gender, and Sexuality Studies Program at Southern Illinois University, USA.

A Preview for this title is currently not available.
More Books By Jacob Juntunen
View All