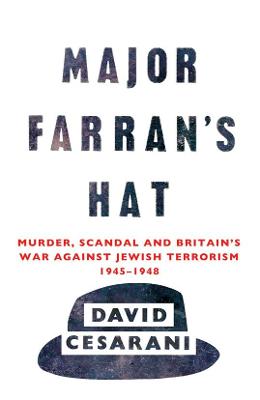 The gripping true story of the murder, in Palestine in 1947, of a Jewish activist by a British counter-terrorist officer and the subsequent cover-up.

In May 1947 a Jewish teenager was mysteriously abducted in Jerusalem. He was never seen alive again. A grey felt hat found at the scene was traced to Major Roy Farran, a highly decorated ex-SAS officer leading a covert counter-terrorist squad. Farran was acquitted after a sensational court martial and came home to a hero's welcome. But the Zionist underground swore vengeance. It had already penetrated British homeland security. Now it sent its top man after Farran.This story of violence, cover ups and expediency reveals the full extent and ambition of Jewish terrorist attacks on Britain and throws light on Britain's legacy in the Middle East, with remarkable echoes of today's War on Terror. 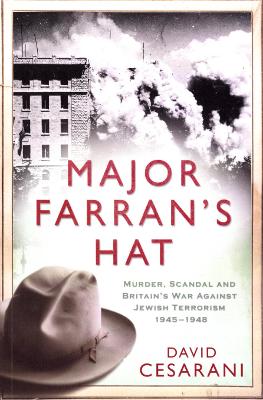 » Have you read this book? We'd like to know what you think about it - write a review about Major Farran's Hat book by Dr David Cesarani and you'll earn 50c in Boomerang Bucks loyalty dollars (you must be a Boomerang Books Account Holder - it's free to sign up and there are great benefits!)

David Cesarani is Research Professor in History at Royal Holloway, University of London. His publications include Justice Delayed- How Britain Became a Refuge for Nazi War Criminals, Arthur Koestler- The Homeless Mind and, most recently, Eichmann- His Life and Crimes, which won the 2006 US National Jewish Book Award for History. He has written and edited several books exploring the relationship between Britain, British Jews, and Zionism including The 'Jewish Chronicle' and Anglo-Jewry and The Making of Modern Anglo-Jewry.

A Preview for this title is currently not available.
More Books By Dr David Cesarani
View All