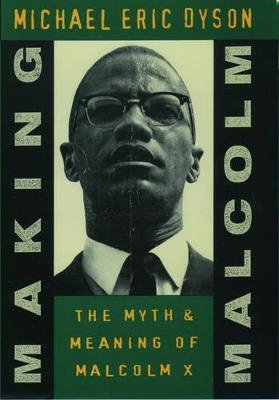 The Myth and Meaning of Malcolm X

Malcolm X's cultural rebirth--his improbable second coming--brims with irony. The nineties are marked by intense and often angry debates about racial authenticity and "selling out," and the participants in these debates--from politicians to filmmakers to rap artists--often draw on Malcolm's scorching rebukes to such moves. Meanwhile, Malcolm's "X" is marketed in countless business endeavors and is stylishly branded on baseball hats and T-shirts sported by every age,
race, and gender. But this rampant commercialization is only a small part of Malcolm's remarkable renaissance. One of the century's most complex black leaders, he is currently blazing a new path
across contemporary popular culture, and has even seared the edges of an academy that once froze him out. Thirty years after his assassination, what is it about his life and words that speaks so powerfully to so many? In Making Malcolm, Michael Eric Dyson probes the myths and meanings of Malcolm X for our time. From Spike Lee's film biography to Eugene Wolfenstein's psychobiographical study, from hip-hop culture to gender and racial politics, Dyson cuts a
critical swathe through both the idolization and the vicious caricatures that have undermined appreciation of Malcolm's greatest accomplishments. The book's first section offers a boldly original and penetrating
analysis of the major trends in interpreting Malcolm's legacy since his death, and the fiercely competing interests and ideologies that have shaped these trends. From mainstream books to writings published by the independent black press, Dyson identifies and examines the different "Malcolms" who have emerged in popular and academic investigations of his life and career. With impassioned and compelling force, Dyson argues that Malcolm was too formidable a historic figure--the movements he led
too variable and contradictory, the passion and intelligence he summoned too extraordinary and disconcerting--to be viewed through any narrow cultural prism. The second half of
the book offers a fascinating exploration of Malcolm's relationship to a resurgent black nationalism, his influence on contemporary black filmmakers and musicians, and his use in progressive black politics. From sexism and gangsta rap to the painful predicament of black males, from the politics of black nationalism to the possibilities of race in the Age of Clinton, Dyson's trenchant and often inspiring analysis reveals how Malcolm's legacy continues to spur debate and action
today.A rare and important book, Making Malcolm casts new light not only on the life and career of a seminal black leader, but on the aspirations and passions of the growing numbers who have seized
on his life for insight and inspiration.

» Have you read this book? We'd like to know what you think about it - write a review about Making Malcolm book by Michael Eric Dyson and you'll earn 50c in Boomerang Bucks loyalty dollars (you must be a Boomerang Books Account Holder - it's free to sign up and there are great benefits!)

Michael Eric Dyson is an ordained Baptist minister and Professor of Communications Studies at the University of North Carolina, Chapel Hill. He is the author of the acclaimed Between God and Gangsta' Rap (OUP USA, 1996), and his work has appeared in The New York Times,The Washington Post, Emerge Magazine, The Nation, Vibe, andRolling Stone.