Filled with anecdotes about (and the occasional interview with) the unforgettable hosts, the inspired creators, and the many talented actors she's worked with over the years, Making Masterpiece is a compulsively readable treat for any fan of these beloved and iconic programs.
When Rebecca Eaton became the producer of Masterpiece Theatre in 1985, she hadn't actually seen many of the episodes. Nor did she even like mystery novels, though she would be required to choose stories for Mystery! But the lifelong Anglophile seized her chance to make a mark in the budding public television system. Twenty-eight years later, Masterpiece is one of television's hottest shows, and Eaton is responsible for its triumphant transition from the 'quill-pen' era into the digital age.

Filled with anecdotes about (and the occasional interview with) the unforgettable hosts, the inspired creators, and the many talented actors she's worked with over the years, Making Masterpiece is a compulsively readable treat for any fan of these beloved and iconic programs.

' An anecdote-filled memoir . . . Rebecca Eaton looks back on 25 fascinating years at Masterpiece Theatre and Mystery!' USA Today
'In the world of TV drama, names and faces appear and disappear with bewildering speed; Rebecca Eaton is immortal and immutable.'Vanity Fair 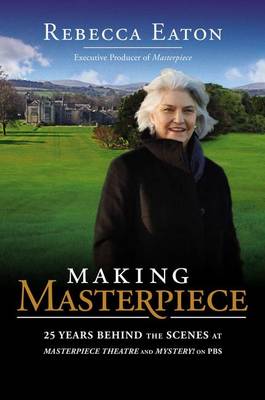 » Have you read this book? We'd like to know what you think about it - write a review about Making Masterpiece book by Rebecca Eaton and you'll earn 50c in Boomerang Bucks loyalty dollars (you must be a Boomerang Books Account Holder - it's free to sign up and there are great benefits!)

Rebecca Eaton regards her decades-long stewardship of Masterpiece as the ideal job for the daughter of an English professor and an actress. She has been the executive producer of the show for twenty-eight of its forty-two years on the air. Awards on her watch include forty-three prime-time Emmy awards, fifteen Peabody awards, two Golden Globes, and two Academy Award nominations. At Masterpiece Theatre and Mystery! she extended the programs' reach with contemporary dramas; initiated co-productions with the BBC (Middlemarch, The Buccaneers); co-produced feature films such as Jane Austen's Persuasion and Mrs. Brown starring Dame Judi Dench; and oversaw the rebranding of the series in 2008. Queen Elizabeth II awarded her an honorary OBE (Officer, Order of the British Empire) in 2003. She lives in Cambridge, Massachusetts, and spends time at the family house in Kennebunkport, Maine.

A Preview for this title is currently not available.
More Books By Rebecca Eaton
View All