On May 14, 1948 the State of Israel was declared, announced by
David Ben-Gurion at a small gathering that assembled in the main
hall of the Tel Aviv Art Museum. Within a time frame of only
nineteen years, culminating in the Six-Day War, Israel fought three
separate wars. But within its first four years, thanks to mass
immigration, its population doubled. Furthermore, Israel had been
confronted with acute economic difficulties, intra Jewish ethnic
tensions, a problematic Arab minority and a secular-religious
divide. Apart from defence issues, Israel faced a generally hostile
or, at best, indifferent international community rendering it hard
pressed in securing great power patronage or even official sympathy
and understanding. Based on a wide range of sources, both in Hebrew
and English, this book contains a judicious synthesis of the
received literature to yield the general reader and student alike a
reliable, balanced, and novel account of Israel?s fateful and
turbulent infancy. 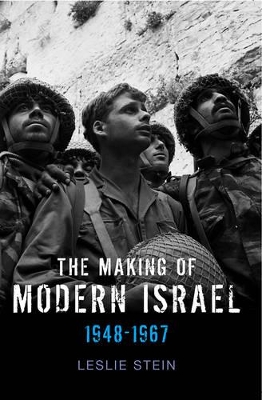 » Have you read this book? We'd like to know what you think about it - write a review about Making of Modern Israel - 1948-1967 book by Leslie Stein and you'll earn 50c in Boomerang Bucks loyalty dollars (you must be a Boomerang Books Account Holder - it's free to sign up and there are great benefits!)