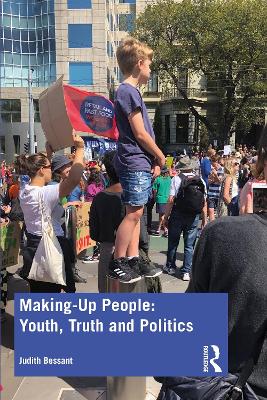 This book is about modern politics and young people. Judith Bessant revises some long-standing myths about children and young people's politics. She highlights the huge gap between the many ways young people and politics are talked about and how they have long been politically active.

Bessant draws on a relational historical sociology to show how since the nineteenth century certain historical dynamics, political interests and social imaginaries have enabled social scientists, writers, political leaders and policymakers to imagine and 'make up' different kinds of young people. Given these representations of childhood, adolescence and youth, everyone knows that young people are cognitively immature, inexperienced, morally under-developed and lack good judgement. For these reasons they cannot possibly be allowed to engage in the serious, grown-up business of politics. Yet in just one of the many contradictions, young people are criticised by many of their elders for being politically apathetic and disengaged from politics.

Many think recent global warming movements largely led by quite young people are a novel phenomenon. Yet young people have been at the forefront of political movements of all kinds since the French Revolution. Since the 1960s, children and young people increasingly played a major, if sometimes obscured, role in civil rights, anti-war, anti-globalisation, anti-austerity and global-warming movements. This accessible book is rich in theoretical and historical insight that is sure to appeal to sociologists, historians, youth studies scholars and political scientists, as well as to the general reader. » Have you read this book? We'd like to know what you think about it - write a review about Making-Up People: Youth, Truth and Politics book by Judith Bessant and you'll earn 50c in Boomerang Bucks loyalty dollars (you must be a Boomerang Books Account Holder - it's free to sign up and there are great benefits!)