The Mammoth Book of Muhammad Ali

Description - The Mammoth Book of Muhammad Ali by David West

From his gold medal at the 1960 Olympic Games to his defeat of Sonny Liston to claim the world heavyweight championship in 1964, the unforgettable 'Thrilla in Manila' against Joe Frazier and the 'Rumble in the Jungle' against George Foreman, 'The Greatest of All Time', Muhammad Ali, has captured the attention of the world. His conversion to Islam, his refusal to serve in the in the Vietnam War ('I ain't got no quarrel with them Vietcong') and his speaking tours in the 1960s have all contributed to his status as one of the most revered sporting figures ever.

Here, drawn from books, specialist periodicals, newspapers, college magazines (covering his speaking tours) and the work of major literary figures such as Norman Mailer and Thomas Hauser is the biggest and best collection ever of writing on 'The Greatest'.

Other Editions - The Mammoth Book of Muhammad Ali by David West 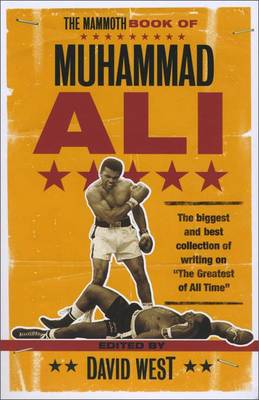 » Have you read this book? We'd like to know what you think about it - write a review about Mammoth Book of Muhammad Ali book by David West and you'll earn 50c in Boomerang Bucks loyalty dollars (you must be a Boomerang Books Account Holder - it's free to sign up and there are great benefits!)

David West is a freelance writer who has been covering combat sports since 2003. He was the British correspondent for the U.S. magazine Full Contact Fighter, and his work has appeared in MMA Unltd, Fighters Only, and Fight Sport, among others. He lives in London.

Return to the Country
Australian Geographic
$21.21 $24.95
More Books By David West
View All