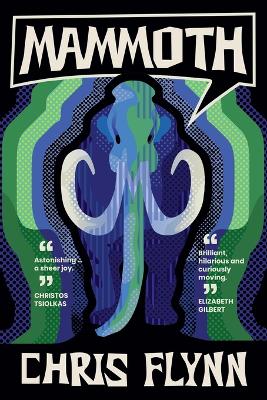 The original, unforgettable and thought-provoking new novel by award-winning author Chris Flynn that will change how readers understand the world.

Narrated by a 13,000-year-old extinct American mastodon, Mammoth is the (mostly) true story of how the skull of a Tyrannosaurus bataar, a pterodactyl, a prehistoric penguin, the severed hand of an Egyptian mummy and the narrator himself came to be on sale at a 2007 natural history auction in Manhattan.

Ranging from the Pleistocene Epoch to nineteenth-century America and beyond, including detours to Napoleonic France and Nazi Germany, Mammoth illuminates a period of history when ideas about science and religion underwent significant change. By tracing how and when the fossils were unearthed, Mammoth traverses time and place to reveal humanity's role in the inexorable destruction of the natural world.

Other Editions - Mammoth by Chris Flynn » Have you read this book? We'd like to know what you think about it - write a review about Mammoth book by Chris Flynn and you'll earn 50c in Boomerang Bucks loyalty dollars (you must be a Boomerang Books Account Holder - it's free to sign up and there are great benefits!)

5 stars “Did you spend much time on the ground? That would be azhdararchidae. Big fella, bit of a temper on him, takes ages to lift off? So I believe. Yep, eaten one of them. Didn’t much care for it. Those leathery wings get stuck in your teeth. Does everything have to be discussed relative to your gullet, T? How can you truly know someone if they haven’t passed through your digestive tract?” (Tyrannosaurus bataar to Pterodactylus antiquus re pterosaurs: Mammoth by Chris Flynn)

Mammoth is the third novel by Northern Ireland-born Australian columnist and author, Chris Flynn. In March, 2007, in the Natural History Auction rooms in Manhattan, the consciousness of a specimen of mammoth, Mammut americanum, (residing in bones that had lain buried for thirteen thousand one hundred and forty-eight years before being exhumed in 1801) muses on the events that led to the extinction of his species, and relates his own journey from being uncovered to landing in said auction rooms, which includes being exhumed, exhibited, stolen, hidden, smuggled overseas and left in a cave.

He shares the room with the much more recently (1991) exhumed skull of a sixty-seven-million-year-old Tyrannosaurus bataar, who remembers his own journey from the Mongolian desert to their current location. Eventually, they are joined by the hand of Queen Hatshepsut, an Egyptian mummy (thirty-four thousand eight hundred and fifty-four years old) and a ten-million-year-old fossilised penguin nicknamed Palaeo (this pair squabble incessantly); later, a one-hundred-and-fifty-million-year-old Bavarian pterodactyl joins in.

It’s clear from page one that Mammut blames Clovis (the ancestor of today’s Americans) for the demise of his race. Using the mammoth to narrate the story is certainly a unique approach, and within his tale, which extends from pre-history all the way through to modern times, Mammut offers a commentary on nationalism and religion, on environment and extinction.

Mammut recounts biped conversations which he, when in sufficiently close proximity could, with his elephantine ears, overhear and, with his legendary elephantine recall, repeat verbatim. Thus we get a taste of behind the scenes at the Irish Rebellion, fossil hunting in the American Frontier, and life with the Osage Indians. His companions offer questions and comments, criticism and the occasional insult; the banter between them is smart and funny.

A cute touch is how each “thinker” (because they’re not speaking, having no mouths) is denoted by both the name each of them uses to address the other, and the style of language they use, this being matched to the era when the exhibit was first exhumed and exposed to human speech, and the location. Thus, T.bataar sounds like a teen from the early nineties, Palaeo’s many years in a Boston bar result in a lot of slang, while Mammut’s style is much more sober, and Hatshepsut’s quite formal.

The Epilogus hominum reveals to the reader just how much of what Mammut tells us can be believed (quite a lot) while the Epilogus mammut spells some hope for the future. The illustrations by Eirian Chapman are charming. Clever, perceptive and hugely entertaining. This unbiased review is from a copy provided by University of Queensland Press. Mammoth by Chris Flynn (UQP $32.99)