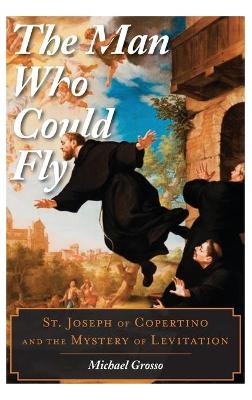 The Man Who Could Fly

St. Joseph of Copertino and the Mystery of Levitation

Description - The Man Who Could Fly by Michael Grosso

St. Joseph of Copertino began having mystical visions at the age of seven, but it was not until he began practicing his faith as a Franciscan priest that he realized the full potential of his mind's power over his body-he was able to levitate. Throughout his priesthood St. Joseph became famous for frequent levitations that were observed on hundreds of occasions and by thousands of witnesses, including many skeptics. Michael Grosso delves into the biography of the saint to explore the many strange phenomena that surrounded his life and develops potential physical explanations for some of the most astounding manifestations of his religious ecstasy. Grosso draws upon contemporary explorations into cognition, the relationship between the human mind and body, and the scientifically recorded effects of meditation and other transcendent practices to reveal the implications of St. Joseph's experiences and abilities.

Buy The Man Who Could Fly by Michael Grosso from Australia's Online Independent Bookstore, Boomerang Books.

Book Reviews - The Man Who Could Fly by Michael Grosso

» Have you read this book? We'd like to know what you think about it - write a review about Man Who Could Fly book by Michael Grosso and you'll earn 50c in Boomerang Bucks loyalty dollars (you must be a Boomerang Books Account Holder - it's free to sign up and there are great benefits!)

Michael Grosso has taught humanities and philosophy at Marymount Manhattan College, City University of New York, and New Jersey City University. He is affiliated with the Division of Perceptual Studies at the University of Virginia, is on the Board of Directors of the American Philosophical Practitioner's Association, and is a past editor of the journal for that association. His published books include The Final Choice: Playing the Survival Game (1985); Frontiers of the Soul: Exploring Psychic Evolution (1992), The Millennium Myth: Love and Death at the End of Time (1995), Soulmaking: Uncommon Paths to Self-Understanding (1997), and Experiencing the Next World Now (2004).

A Preview for this title is currently not available.
More Books By Michael Grosso
View All