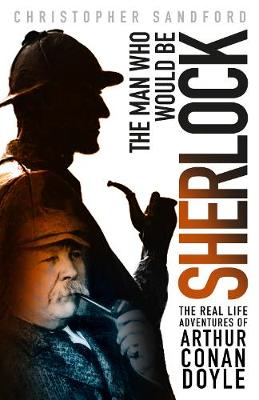 The Man who Would be Sherlock

Description - The Man who Would be Sherlock by Christopher Sandford

When Arthur Conan Doyle was a lonely seven-year-old schoolboy at pre-prep Newington Academy in Edinburgh, a French emigre named Eugene Chantrelle was engaged there to teach Modern Languages. Ten years later, Chantrelle would be hanged for the murder of six young girls, and two boys from the Academy - and medical student Doyle would provide forensic evidence at the trial concerning the dismembered bodies. This extraordinary link between actual murder and the greatest detective story writer of all time is one of many. Christopher Sandford follows those links and draws out the connections between Conan Doyle's literary output and factual criminality, a pattern that will enthrall and surprise the legions of Sherlock fans. In a sense, Conan Doyle wanted to be Sherlock to be a man who could bring order and justice to a terrible world. AUTHOR: Christopher Sandford is the author of 22 books. The Final Over published by The History Press is currently in its third printing. Houdini and Conan Doyle: Friends of Genius, Deadly Rivals, the story of the strange relationship between Conan Doyle and Harry Houdini, was published in 2011. It was recently bought by the BBC for adaptation into a television miniseries. Christopher's books have been translated into 15 languages. SELLING POINTS: A new way of interpreting the ever-popular Sherlock phenomenon Drawn from access to the Rare Books Room of Cambridge University Library; the Manuscripts Room, British Library; the Conan Doyle Bequest; the Harry Ransom Center at the University of Texas; and the author's own private collection Conan Doyle's personal crusades for justice, played out in public, are sometimes more lurid than anything in his prose, involving as they do Winston Churchill, the Lusitania and cattle mutilation! 18 b/w illustrations

Buy The Man who Would be Sherlock by Christopher Sandford from Australia's Online Independent Bookstore, Boomerang Books.

Book Reviews - The Man who Would be Sherlock by Christopher Sandford

» Have you read this book? We'd like to know what you think about it - write a review about Man who Would be Sherlock book by Christopher Sandford and you'll earn 50c in Boomerang Bucks loyalty dollars (you must be a Boomerang Books Account Holder - it's free to sign up and there are great benefits!)

Christopher Sandford is the author of 24 books. The Final Over - published by The History Press - is currently in its third printing. Houdini and Conan Doyle: Friends of Genius, Deadly Rivals, the story of the strange relationship between the two greatest public performers of the early twentieth century, was published in 2011. It has recently been in development as a television miniseries. Christopher Sandford's account of John F. Kennedy and his lifelong relationship with Great Britain and the British people will also be published in 2017, the centenary year of Kennedy's birth. Christopher's books have been translated into 18 languages.

A Preview for this title is currently not available.
More Books By Christopher Sandford
View All

Masters of Mystery: The Strange Friendship of Arthur Conan Doyle and Harry Houdini
$50.67 $56.30