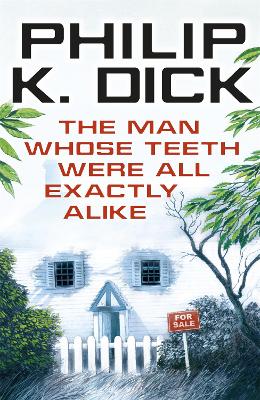 The Man Whose Teeth Were All Exactly Alike

Small town America tears itself apart in this realist novel from one of the greats of science fictionLeo Runcible - of Runcible Realty - is too excitable and too pushy. His wife drinks too much. He may be a man of principle, but Liberal Jewish Leo is an outsider in the lilywhite Carquinez, Marin County.When he gets into a pointless argument with a customer over his neighbour Walt Dombrosio's house guests, the resulting ramifications follow a bizarre logic of cause and effect to lead in entirely unexpected directions ...And can Leo really have found the skull of a Neanderthal man in middle America?THE MAN WHOSE TEETH WERE ALL EXACTLY ALIKE is a dazzling novel by a writer famous for his power to surprise and delight.

Buy The Man Whose Teeth Were All Exactly Alike by Philip K Dick from Australia's Online Independent Bookstore, Boomerang Books.

» Have you read this book? We'd like to know what you think about it - write a review about Man Whose Teeth Were All Exactly Alike book by Philip K Dick and you'll earn 50c in Boomerang Bucks loyalty dollars (you must be a Boomerang Books Account Holder - it's free to sign up and there are great benefits!)