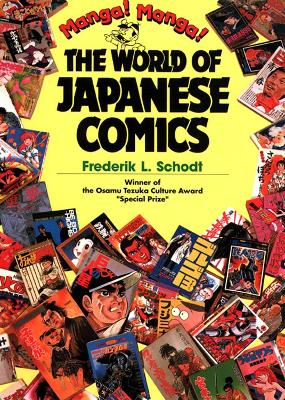 Since first published in 1983, Manga! Manga!- The World of Japanese Comics has been the book to read for all those interested in Japanese comics. It is virtually the "bible" from which all studies and appreciation of manga begins. More than that, given the influence of Japanese manga on animation and on American-produced comics as well, Manga! Manga! provides the background against which these other arts can be understood. The book includes 96 pages from Osamu Tezuka's Phoenix, Reiji Matsumoto's Ghost Warrior, Riyoko Ikeda's The Rose of Versailles, and Keiji Nakazawa's Barefoot Gen.

» Have you read this book? We'd like to know what you think about it - write a review about Manga! Manga!: The World Of Japanese Comics book by Osamu Tezuka and you'll earn 50c in Boomerang Bucks loyalty dollars (you must be a Boomerang Books Account Holder - it's free to sign up and there are great benefits!)

FREDERIK L. SCHODT is a writer, translator, and interpreter who lives in San Francisco. His books include America and the Four Japans- Friend, Foe, Model, Mirror; Inside the Robot Kingdom- Japan, Mechatronics and the Coming Robotopia; and Dreamland Japan- Writings on Modern Manga. Among his translations of novels are The Gundam Mobile Suit series, Betty and Jack Forever, and My Boy- A Father's Memories. His translations of manga include Barefoot Ben- A Cartoon History of Hiroshima (vol. 2), The Rose of Versailles (vols. 1 & 2), Ghost in the Shell, and The Four Immigrants Manga- A Japanese Experience in San Francisco, 1904-1924. Manga! Manga! The World of Japanese Comics won the special prize at the Manga Oscar Awards in 1983, sponsored by the Japan Cartoonists Association. In 2000, Fred himself was awarded the Asahi Shinbun's Osamu Tezuka Culture Award "Special Prize" for his outstanding contribution toward making manga known outside of Japan.

A Preview for this title is currently not available.
More Books By Osamu Tezuka
View All