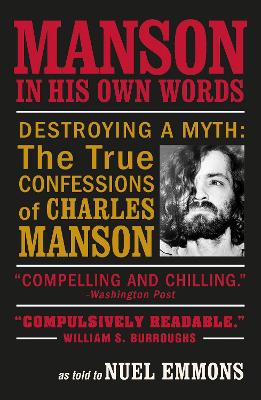 Manson in His Own Words

Description - Manson in His Own Words by Nuel Emmons

We called him a devil and quarantined him behind such labels as 'the most dangerous man alive.' But Charles Manson remains a shocking reminder of our own humanity gone awry. This astonishing book lays bare the life and the mind of a man whose acts left us horrified. His story provides an enormous amount of information about his life and how it led to the Tate-LaBianca murders, and reminds us of the complexity of the human condition.

Born in the middle of the Depression to an unmarried fifteen-year-old, Manson lived through a bewildering succession of changing homes and substitute parents, until his mother finally asked the state authorities to assume his care when he was twelve.

Regimented and often brutalized in juvenile homes, Manson became immersed in a life of petty theft, pimping, jail terms and court appearances that culminated in seven years of prison. Released in 1967, he suddenly found himself in the world of hippies and flower children, a world that not only accepted him, but even glorified his anti-establishment values. It was a combination that led, for reasons only Charles Manson can fully explain, to tragedy. Manson's story, distilled from seven years of interviews and examinations of his correspondence, provides sobering insight into the making of a criminal mind, and a fascinating picture of the last years of the sixties. No one who wants to understand that time, and the man who helped to bring it to a horrifying conclusion, can miss reading this book.

Buy Manson in His Own Words by Nuel Emmons from Australia's Online Independent Bookstore, Boomerang Books.

Other Editions - Manson in His Own Words by Nuel Emmons 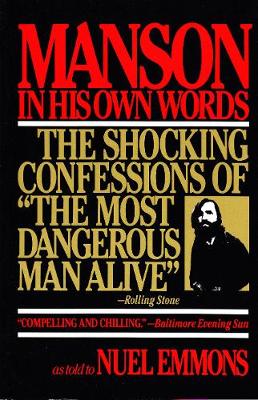 Book Reviews - Manson in His Own Words by Nuel Emmons

» Have you read this book? We'd like to know what you think about it - write a review about Manson in His Own Words book by Nuel Emmons and you'll earn 50c in Boomerang Bucks loyalty dollars (you must be a Boomerang Books Account Holder - it's free to sign up and there are great benefits!)


A Preview for this title is currently not available.
More Books By Nuel Emmons
View All