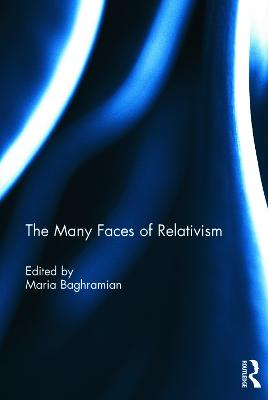 The Many Faces of Relativism

Description - The Many Faces of Relativism by Maria Baghramian

This book is a study of relativism as a dominant intellectual preoccupation of our time. Relativism asks how we are to find a way out of intractable differences of perspectives and disagreements in various domains. Standards of truth, rationality, and ethical right and wrong vary greatly and there are no universal criteria for adjudicating between them. In considering this problem, relativism suggests that what is true or right can only be determined within variable contexts of assessment.

This book brings together articles published in the International Journal of Philosophical Studies over a period of 17 years, as well as in a Special Issue of the journal published in 2004. The chapters in Section I discuss some of the main forms of relativism. Section II sheds light on the different motivations for relativism, assessing their strengths and weaknesses. Section III provides a detailed examination of the vexed question of whether Ludwig Wittgenstein, in his later work, supported relativism. The varied responses to this important question shed light on the issues discussed in Sections I and II. This collection is a lively and engaging resource for scholars interested in the crucial impact relativism has had on the way we think about the meaning of truth, and what is right and wrong.

The chapters in this book were originally published in the International Journal of Philosophical Studies.

Buy The Many Faces of Relativism by Maria Baghramian from Australia's Online Independent Bookstore, Boomerang Books.

Book Reviews - The Many Faces of Relativism by Maria Baghramian

» Have you read this book? We'd like to know what you think about it - write a review about Many Faces of Relativism book by Maria Baghramian and you'll earn 50c in Boomerang Bucks loyalty dollars (you must be a Boomerang Books Account Holder - it's free to sign up and there are great benefits!)

Maria Baghramian is a Professor of Philosophy and currently Head of School of Philosophy at University College Dublin, Ireland. She is also the co-director of the Cognitive Science Programme in UCD, the Chief Editor of the International Journal of Philosophical Studies and a member of the Royal Irish Academy. Her publications include Relativism (2004), Reading Putnam (2012) and Donald Davidson: Life and Words (2012).