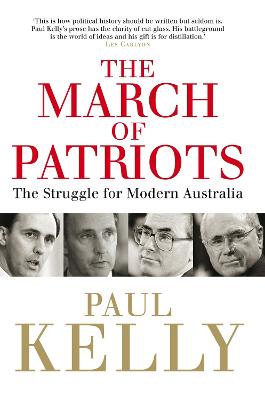 The March of Patriots

The Struggle for Modern Australia

Description - The March of Patriots by Paul Kelly

"The March of Patriots is the inside story of how Paul Keating and John Howard changed Australia. It sees Keating and Howard as conviction politicians, tribal warriors and national interest patriots.
Divided by belief, temperament and party, they were united by generation, city and the challenge to make Australia into a successful nation for the globalised age.
This book is about the making of policy and the uses of power. It captures the authentic nature of Australian politics as distinct from the polemics advanced by both sides. Its focus is how Keating and Howard as Prime Ministers altered the nation's direction, redefined their parties and struggled over Australia's new economic, social, cultural and foreign policy agendas.
A sequel to Paul Kelly's bestselling The End of Certainty, it is based on more than 100 interviews with the two key players, politicians, advisers and public servants. It relies heavily on 'on the record' disclosures and new documents from the period. Its theme is that Keating and Howard, as rivals and unrecognised collaborators, are best seen together, and that their legacy is impressive, contradictory and incomplete.

Book Reviews - The March of Patriots by Paul Kelly

» Have you read this book? We'd like to know what you think about it - write a review about March of Patriots book by Paul Kelly and you'll earn 50c in Boomerang Bucks loyalty dollars (you must be a Boomerang Books Account Holder - it's free to sign up and there are great benefits!)

Paul Kelly is the author of six books: The Unmaking of Gough, The Hawke Ascendancy, The End of Certainty, November 1975, Paradise Divided and 100 Years: The Australian Story.