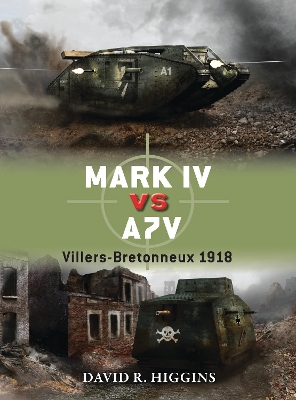 The German A7V and the British Mark IV were similar in weight, size, and speed, but differed significantly in armour, armament and maneuverability. The A7V had thicker armour, and had nearly double the horsepower per ton. The Mark IV's pair of side-mounted 6pdr cannons forced the vehicle to present its side arc to an enemy in order to fire one of its main guns. Possessing twice as many machine guns as the Mark IV, the A7V had a frontally mounted 57mm gun that proved capable of defeating the Mark IV's armour. The Mark IV's rhomboid design proved superior in crossing trenches, climbing obstacles and moving over rough terrain. As the first tank-versus-tank engagement in history, the fighting around Villers-Bretonneux showcased the British Mark IV and German A7V designs. Although not purpose-built to combat enemy armour, both vehicles proved the viability of such operations, which during the postwar period led to key advances in suspension, armour, gunsights, ammunition, and command and control. While the British continued to develop their armoured forces, German armour development never materialized, and only in the postwar period did they address the issue.

» Have you read this book? We'd like to know what you think about it - write a review about Mark IV vs A7V book by David R. Higgins and you'll earn 50c in Boomerang Bucks loyalty dollars (you must be a Boomerang Books Account Holder - it's free to sign up and there are great benefits!)

David R. Higgins attended the Columbus College of Art & Design, and received a BFA from Ohio State University and an MISM from Keller. In addition to The Roer River Battles and King Tiger vs IS-2: Operation Solstice 1945 he has written over 40 articles for magazines such as Strategy and Tactics, Armchair General, Modern War and World at War, as well as MCS Group's States of Conflict. He lives in Columbus, Ohio. Ian Palmer is a highly experienced digital artist. A graduate in 3D Design, he currently works as Art Director for a leading UK games developer. Besides his artistic interests he is also a keen musician and motorcyclist.