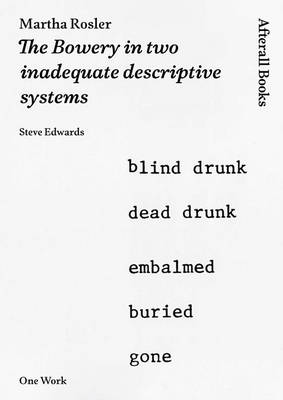 The first sustained critical examination of a work by Martha Rosler that bridged the concerns of conceptual art with those of political documentary.In The Bowery in two inadequate descriptive systems (1974-1975) Martha Rosler bridged the concerns of conceptual art with those of political documentary. The work, a series of twenty-one black-and-white photographs, twenty-four text panels and three blank panels, embraces the codes of the photo-text experiments of the late 1960s and applies them to the social reality of New York's Lower East Side. The prevailing critical view of The Bowery focuses on its implicit rejection, or critique, of established modes of documentary. In this illustrated, extended essay on the work by Rosler, Steve Edwards argues that although the critical attitude towards documentary is an important dimension of the piece, it does not exhaust the meaning of the project.
Edwards situates the work in relation to debates and practices of the period, especially conceptual art and the emergence of the photo-text paradigm exemplified by the work of Robert Smithson, Bernd and Hilla Becher, Hans Haacke, Victor Burgin, and the Women and Work group. In particular, he contextualizes Rosler's work of this period within the politicized San Diego group (which included, in addition to Rosler, Allan Sekula, Fred Lonidier, and Philip Steinmetz). Comparing The Bowery to Rosler's later video vital statistics of a citizen, simply obtained (1977) and the films of the Dziga-Vertov Group (formed by Jean-Luc Godard and Jean-Pierre Gorin), Edwards shows how the work engages with conceptual art and the neo-avant-garde of the 1960s and 1970s.

» Have you read this book? We'd like to know what you think about it - write a review about Martha Rosler book by Steve Edwards and you'll earn 50c in Boomerang Bucks loyalty dollars (you must be a Boomerang Books Account Holder - it's free to sign up and there are great benefits!)

Steve Edwards is a Lecturer in Art History at the Open University. He is the author of The Making of English Photography: Allegories and Photography: A Very Short Introduction, editor of Art and Its Histories, coeditor of The Art of the Avant-Gardes, and an editor of the journal Historical Materialism.

A Preview for this title is currently not available.
More Books By Steve Edwards
View All