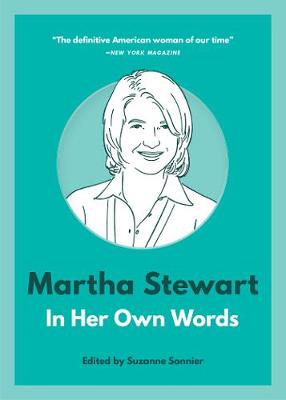 Martha Stewart: In Her Own Words

Description - Martha Stewart: In Her Own Words by Suzanne Sonnier

This collection of quotes has been gathered from Martha Stewart's numerous public statements-interviews, op-eds, television appearances, books, and more. It's a comprehensive picture of her business empire, her advice for life and the home, and her comeback after scandal and imprisonment. Martha Stewart has called herself a 'late bloomer,' but after she published her first book, Entertaining, at the age of 49, she rapidly built on that first success, launching magazines, television shows, retail lines, and more books to establish a media empire.

Her name is synonymous with tasteful decor, delicious from-scratch foods, and the covetable estates she keeps in upstate New York, the Hamptons, and Maine. Even after the insider trading scandal that threatened to derail her career in 2004, Stewart was able to rebuild her image of classic domesticity matched by a tireless work ethic.

New ventures like 'Martha & Snoop's Potluck Dinner Party' have added a sense of playfulness to her personal brand and introduced her to new audiences. A winner of multiple Emmys and James Beard Awards, and the chairperson of her own media conglomerate, Stewart has proven she has staying power across generations.

She's a true icon, not just for fans who learned how to cook and keep house from her books and television shows, but for audiences who associate her name with taste, simplicity, and style.

Book Reviews - Martha Stewart: In Her Own Words by Suzanne Sonnier

» Have you read this book? We'd like to know what you think about it - write a review about Martha Stewart: In Her Own Words book by Suzanne Sonnier and you'll earn 50c in Boomerang Bucks loyalty dollars (you must be a Boomerang Books Account Holder - it's free to sign up and there are great benefits!)


A Preview for this title is currently not available.
More Books By Suzanne Sonnier
View All