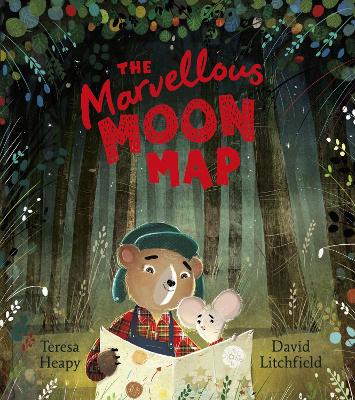 A beautiful and lyrical story about friendship, trust and a quest to find the moon . . .

One day, adventurous Mouse sets off to find the moon with his Marvellous Moon Map, leaving his worried friend Bear behind. But as the Woods get darker, and the weather gets worse, Mouse soon realizes that he needs more than just the Moon Map to find his way . . .

An emotional and atmospheric tale of true friendship, beautifully told by Teresa Heapy with stunning illustrations from Waterstones-Prizewinning David Litchfield

» Have you read this book? We'd like to know what you think about it - write a review about Marvellous Moon Map book by Teresa Heapy and you'll earn 50c in Boomerang Bucks loyalty dollars (you must be a Boomerang Books Account Holder - it's free to sign up and there are great benefits!)

Teresa Heapy (Author) Teresa swapped the office desk for the kitchen table in 2009, having worked as a Commissioning Editor for Oxford University Press for several years and deciding that what she really wanted to do was write books. Since then, she has written about gorillas, Batman, the ugly duckling and green goo (not all in the same book) for Raintree, Pearson, OUP and HarperCollins. In her spare time, she does comedy improvisation and plays the ukulele. She lives in Oxford, England, with her husband and three children. www.teresaheapy.co.uk David Litchfield (Illustrator) David Litchfield first started to draw when he was very young, creating Star Wars and Indiana Jones 'mash up' comics for his older brother and sister. Since then David's work has appeared in magazines, newspapers, books and on T-shirts. He has also exhibited his illustrations in both solo and group shows in the U.K, Europe and America. His first picture book,The Bear and the Piano, won the Waterstones Prize and has sold in 12 languages. David lives in Bedford with his family.

A Preview for this title is currently not available.
More Books By Teresa Heapy
View All