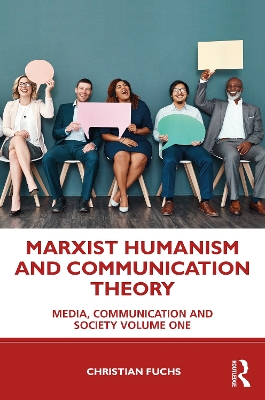 This book outlines and contributes to the foundations of Marxist-humanist communication theory. It analyses the role of communication in capitalist society.

Engaging with the works of critical thinkers such as Erich Fromm, E. P. Thompson, Raymond Williams, Henri Lefebvre, Georg Lukacs, Lucien Goldmann, Gunther Anders, M. N. Roy, Angela Davis, C. L. R. James, Rosa Luxemburg, Eve Mitchell, and Cedric J. Robinson, the book provides readings of works that inform our understanding of how to critically theorise communication in society. The topics covered include the relationship of capitalism, racism, and patriarchy; communication and alienation; the base/superstructure-problem; the question of how one should best define communication; the political economy of communication; ideology critique; the connection of communication and struggles for alternatives.

Written for a broad audience of students and scholars interested in contemporary critical theory, this book will be useful for courses in media and communication studies, cultural studies, Internet research, sociology, philosophy, political science, and economics.

This is the first of five Communication and Society volumes, each one outlining a particular aspect of the foundations of a critical theory of communication in society. » Have you read this book? We'd like to know what you think about it - write a review about Marxist Humanism and Communication Theory: Media, Communication and Society Volume One book by Christian Fuchs and you'll earn 50c in Boomerang Bucks loyalty dollars (you must be a Boomerang Books Account Holder - it's free to sign up and there are great benefits!)


A Preview for this title is currently not available.
More Books By Christian Fuchs
View All

Nationalism on the Internet: Critical Theory and Ideology in the Age of Social Media and Fake News
$249.48 $252.00