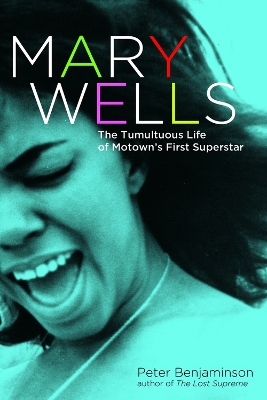 Years before Diana Ross, Mary Wells was the first Motown solo superstar, the internationally popular songstress who sang the megahit My Guy. Her songs consistently and repeatedly reached huge audiences in America and England, both black and white. She captivated the Beatles, toured with them, and was briefly more popular than they were on the pop charts. But Wells was much more than a successful singer with an alluring voice. She also displayed an irrepressible fighting spirit, along with a ferocious belief in her own talent. She left Motown at age 21 and spent the rest of her life trying to fight her way back to the top. Though she never managed to do so, she never gave up her struggle, and the long fight ennobled her. She also had a series of tumultuous affairs and marital attachments with several well-known singers and songwriters. And near the end of her life, Wells fought a drawn-out and courageous battle with throat cancer, giving perhaps her gutsiest performance. Peter Benjaminson has spent years interviewing Wells's friends, lovers, and husbands, and obtained an amazingly detailed unreleased taped interview with Wells herself. In Mary Wells, he tells her whole story, complete with never-before revealed details about the sex, the violence, and the drugs in her life--and about her Motown hits that captivated the world.

» Have you read this book? We'd like to know what you think about it - write a review about Mary Wells book by Benjaminson Peter and you'll earn 50c in Boomerang Bucks loyalty dollars (you must be a Boomerang Books Account Holder - it's free to sign up and there are great benefits!)

Peter Benjaminson is the author of Death in the Afternoon: America's Newspaper Giants Struggle for Survival, Secret Police: Inside the New York City Department of Investigation, and The Story of Motown, and is the coathor of Investigative Reporting. He is a former reporter for The Atlanta Journal-Constitution and the Detroit Free Press. He lives in New York City.

A Preview for this title is currently not available.
More Books By Benjaminson Peter
View All