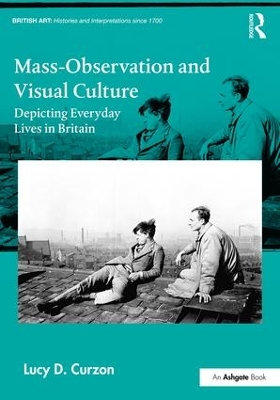 Mass-Observation and Visual Culture: Depicting Everyday Lives in Britain critically analyses the role that visual culture played in the early development of Mass-Observation, the innovative British anthropological research group founded in 1937. The group's production and use of painting, collage, photography, and other media illustrates not only the broad scope of Mass-Observation's efforts to document everyday life, but also, more specifically, the centrality of visual elements to its efforts at understanding national identity in the 1930s.

Although much interest has previously focused on Mass-Observation's use of written reports and opinion surveys, as well as diaries that were kept by hundreds of volunteer observers, this book is the first full-length study of the group's engagement with visual culture. Exploring the paintings of Graham Bell and William Coldstream; the photographs of Humphrey Spender; the paintings, collages, and photographs of Julian Trevelyan; and Humphrey Spender's photographs and widely recognized 'Mass-Observation film', Spare Time, among other sources, Mass-Observation and Visual Culture: Depicting Everyday Lives in Britain positions these works as key sources of information with regard to illuminating the complex character of British identity during the Depression era.

» Have you read this book? We'd like to know what you think about it - write a review about Mass-Observation and Visual Culture book by Lucy D. Curzon and you'll earn 50c in Boomerang Bucks loyalty dollars (you must be a Boomerang Books Account Holder - it's free to sign up and there are great benefits!)

Lucy Curzon holds a PhD in Visual Culture Studies and is Associate Professor of Art History at the University of Alabama. She has previously published work on contemporary portrait painting, as well as on the Ashington Group and Humphrey Spender.