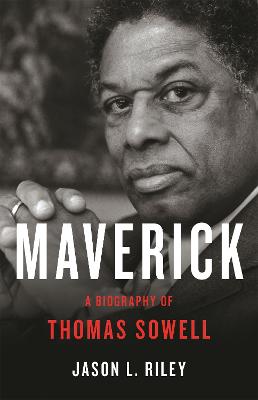 Maverick: A Biography of Thomas Sowell

Thomas Sowell has an almost godlike status amongst conservative intellectuals. "It's a scandal that economist Sowell has not been awarded the Nobel Prize," wrote a reviewer in Forbes. A profile in the Wall Street Journal described him as "one of America's great sages." His writing on politics, economics, and social issues have prompted both contempt and praise. In Maverick, Jason Riley explores the life and ideas of Thomas Sowell, one of America's most important Black intellectuals.A bright student with a tumultuous home life, Sowell was admitted to one of New York's most competitive high schools but dropped out at age 16. He left home a year later and moved into a shelter in the Bronx for homeless boys where he kept a knife under his pillow for protection. Years later, the G.I. bill enabled him to enroll in night school at Howard University and after his freshman year, he transferred to Harvard. By 1968, Sowell received his doctorate in economics from the University of Chicago, his dissertation written under the guidance of future Nobel economists Milton Friedman and George Stigler. Maverick follows Sowell from the University of Chicago to his early critiques of the Civil Rights moment. In the 60s and 70s, Sowell accepted teaching positions at Howard, Cornell, UCLA, and elsewhere -- but the campus turmoil of the era clashed with Sowell's principles and he refused to bend. He turned his attention to writing.Over the past fifty tears, Sowell has written over thirty books and countless columns and media appearances. Riley offers an introduction to Sowell's ideas, from race and inequality to economics and education. Riley considers how Sowell's own history alongside the moments and movements that shaped his thinking to offer a nuanced portrait of one of America's leading conservative intellectuals. Maverick explores the extraordinary scope and depth of arguably the most influential and trenchant Black social critics alive in America today - one whose contributions have been underacknowledged because they do not align with progressive ideas about race.

» Have you read this book? We'd like to know what you think about it - write a review about Maverick: A Biography of Thomas Sowell book by Jason L. Riley and you'll earn 50c in Boomerang Bucks loyalty dollars (you must be a Boomerang Books Account Holder - it's free to sign up and there are great benefits!)


A Preview for this title is currently not available.
More Books By Jason L. Riley
View All