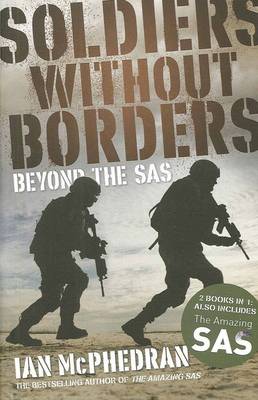 Two national bestsellers, that have collectively sold over 85 000 copies, are now available in one special edition, bringing you an unparalleled source of SAS knowledge that is not to be missed. SOLDIERS WItHOUt BORDERS: 'Jones knew the score with "deniable" operations that were sanctioned secretly at the highest levels. If they turned to custard and the cover was blown, the powers-that-be would simply deny everything and disown all involved, from the military down to the spooks and, at the bottom of the food chain, hired guns like him.' What happens to the elite, close-knit soldiers of Australia's Special Air Service (SAS) Regiment after they leave the Who Dares Wins world of special forces? For some, there are highly paid jobs in the world's war zones and trouble spots protecting global corporations from terrorism, sabotage and violence. Others become powerful government advisers, many join foreign armies to train their special forces and expand the global brotherhood. Most risky of all, is the shadowy world of deniable 'black ops'. Guarding a deadly secret military cargo - a new missile system brokered through a spook under the guise of a Middle Eastern arms dealer - is all in a day's work. these are the risky yet vital jobs that governments will never admit. From Iraq and Afghanistan to Africa and Asia, award-winning defence writer Ian McPhedran uncovers a virtually unknown network and tells how Australia's top soldiers are forever linked in a seemingly borderless world. tHE AMAZING SAS: For the soldiers and officers of Australia's Special Air Service (SAS) Regiment, this is not just their professional motto, but a creed that shapes their lives. the SAS is among the world's most respected special forces units, a crack team of men from the Australian Defence Force who can be relied upon to handle the most difficult, strategically sensitive and dangerous of military tasks. Now tHE AMAZING SAS provides a thrilling insight into the way this country's SASS soldiers are selected and trained, and reveals fascinating details about recent SAS deployments: East timor, the 2000 Olympic games, the tampa, the Afghanistan sampaign and the regiment's action-packed mission in Iraq. tHE AMAZING SAS draws on interviews with General Peter Cosgrove, Prime Minister John Howard, Chief of Army Lieutenant General Peter Leahy, former SAS commanding officers Gus Gilmore and tim McOwan, and many SAS soldiers and officers.

» Have you read this book? We'd like to know what you think about it - write a review about McPhedran SAS bind-up book by Ian McPhedran and you'll earn 50c in Boomerang Bucks loyalty dollars (you must be a Boomerang Books Account Holder - it's free to sign up and there are great benefits!)