Description - Me Before You by Jojo Moyes

Lou Clark knows lots of things. She knows how many footsteps there are between the bus stop and home. She knows she likes working in The Buttered Bun tea shop and she knows she might not love her boyfriend Patrick.

What Lou doesn't know is she's about to lose her job or that knowing what's coming is what keeps her sane.

Will Traynor knows his motorcycle accident took away his desire to live. He knows everything feels very small and rather joyless now and he knows exactly how he's going to put a stop to that.

What Will doesn't know is that Lou is about to burst into his world in a riot of colour. And neither of them knows they're going to change the other for all time.

'What a wonderful, thoughtful and moving book. I was riveted all the way through. Absolutely loved it.' Sophie Kinsella

'Destined to be the novel that friends press upon each other. More than any other, Lou and Will are a couple who readers will take to their hearts as they did One Day's Emma and Dex. A novel that demands an afternoon on the sofa with a fistful of tissues.' Independent on Sunday

'A triumph. Packs such an emotional punch, you'll need a box of tissues.'Elle

Buy Me Before You by Jojo Moyes from Australia's Online Independent Bookstore, Boomerang Books.

Other Editions - Me Before You by Jojo Moyes 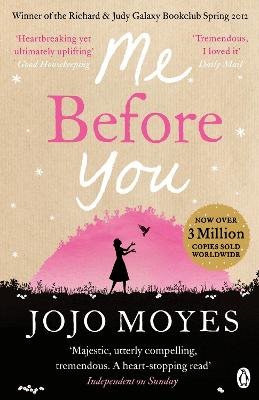 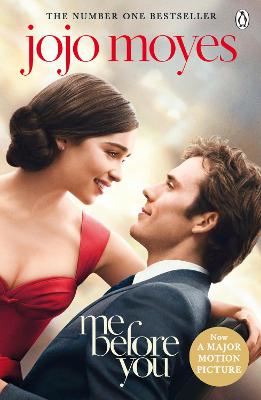 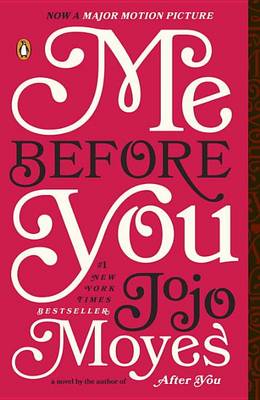 Book Reviews - Me Before You by Jojo Moyes

» Have you read this book? We'd like to know what you think about it - write a review about Me Before You book by Jojo Moyes and you'll earn 50c in Boomerang Bucks loyalty dollars (you must be a Boomerang Books Account Holder - it's free to sign up and there are great benefits!)

Me Before You is the first book in the Me Before You series by award-winning British author, Jojo Moyes. Louisa Clark’s café wages are much relied-upon: her mum, Josie is the stay-at-home carer for Granddad; all of her sister Katrina’s pay goes to bringing up her own young son; and her dad Bernard’s job at the furniture factory is looking less secure every day. So when the Buttered Bun closes down, Lou needs another job pronto. She’s never worked as a carer before, but the pay’s better than at the chicken processing plant, and Lou’s been assured there’ll be no wiping of, you know, required (there’s a trained carer for that stuff).

Camilla Traynor has told Lou she’s basically needed as a companion for her son, Will, who is a quadriplegic since a traffic accident two years ago. But Will’s anger, his mercurial moods, his negativity, these are an unpleasant, if understandable, surprise for Lou. She’s determined to stick it out: she can’t afford to lose this job. But Camilla hasn’t been entirely honest. Before long, Lou discovers the truth, and finds herself doing her utmost to bring enjoyment into Will’s life.

For anyone who has even glanced at the remarks on the cover of later editions of this book, the trajectory of the story and the ending will be predictable, but such is the quality of the characters Moyes creates, and their dialogue, that most readers will not be able to resist reading to the end, although this, as many advise, is best not read in public. And before that end is reached, there are plenty of laugh-out-loud moments and the odd surprise or two.

The novel is mostly a first-person narrative told by Lou, but with occasional (clearly denoted) chapters from the perspective of other significant characters. Moyes tackles several topical and divisive issues: voluntary euthanasia and the right to die; how quality of life is dependent on perspective; the stigma attached to being disabled, the patronising attitudes encountered and the attendant, if unintentional, discrimination suffered. Ultimately a heart-wrenching love story, this novel is also funny and thought-provoking.

Jojo Moyes is a novelist and a journalist. She worked at the Independent for ten years before leaving to write full time. Her previous novels have all been critically acclaimed and include The Ship of Brides, Foreign Fruit and most recently The Last Letter from Your Lover. She lives in Essex with her husband and their three children.

The One Plus One: Discover the author of Me Before You, the love story that captured a million hearts
Available, ships in 7-10 business days
$16.99 $19.99

The Giver of Stars: Fall in love with the enchanting Sunday Times bestseller from the author of Me Before You
Available, ships in 7-10 business days
$16.99 $19.99