The Meaning of Modern Architecture

Its Inner Necessity and an Empathetic Reading

Description - The Meaning of Modern Architecture by Hans Rudolf Morgenthaler

Using empathy, as established by the Vienna School of Art History, complemented by insights on how the mind processes visual stimuli, as demonstrated by late 19th-century psychologists and art theorists, this book puts forward an innovative interpretative method of decoding the forms and spaces of Modern buildings. This method was first developed as scholars realized that the new abstract art appearing needed to be analysed differently than the previous figurative works. Since architecture experienced a similar development in the 1920s and 30s, this book argues that the empathetic method can also be used in architectural interpretation. While most existing scholarship tends to focus on formal and functional analysis, this book proposes that Modern architecture is too diverse to be reduced to a few common formal or ornamental features. Instead, by relying on the viewer's innate psycho-physiological perceptive abilities, sensual and intuitive understandings of composition, form, and space are emphasized. These aspects are especially significant because Modern Architecture lacks the traditional stylistic signs. Including building analyses, it shows how, by visually reducing cubical forms and spaces to linear configurations, the exteriors and interiors of Modern buildings can be interpreted via human perceptive abilities as dynamic movement systems commensurate with the new industrial transportation age. This reveals an inner necessity these buildings express about themselves and their culture, rather than just an explanation of how they are assembled and how they should be used. The case studies highlight the contrasts between buildings designed by different architects, rather than concentrating on the few features that relate them to the zeitgeist. It analyses the buildings directly as the objects of study, not indirectly, as designs filtered through a philosophical or theoretical discourse. The book demonstrates that, with technology and science affecting culture

Other Editions - The Meaning of Modern Architecture by Hans Rudolf Morgenthaler 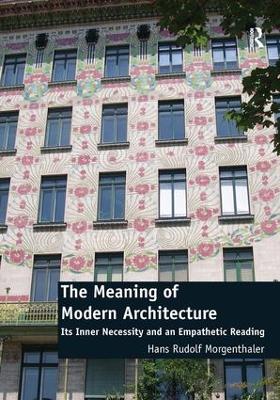 » Have you read this book? We'd like to know what you think about it - write a review about Meaning of Modern Architecture book by Hans Rudolf Morgenthaler and you'll earn 50c in Boomerang Bucks loyalty dollars (you must be a Boomerang Books Account Holder - it's free to sign up and there are great benefits!)

Dr Hans R. Morgenthaler began studying art history at the University of ZA1/4rich, Switzerland. He finished his education at Stanford University in the US with the Ph.D. degree. He is an associate professor in the College of Architecture and Planning at the University of Colorado Denver, where he teaches architectural history lecture courses and seminars in 20th-century architectural history and theory. His main research interests lie in 20th-century Central European architecture with a special emphasis on theoretical questions. Within this field, he focuses particularly on interdisciplinary projects, which investigate architecture as a part of culture. He has published articles and books on the career of the German Expressionist architect Erich Mendelsohn, including two chapters in the book Eric Mendelsohn Architect 1887-1953, which was published in 2000. Current projects reach from an effort to update Vitruvius's architectural treatise and an architectural guide to the buildings of Colorado, USA.

A Preview for this title is currently not available.
More Books By Hans Rudolf Morgenthaler
View All