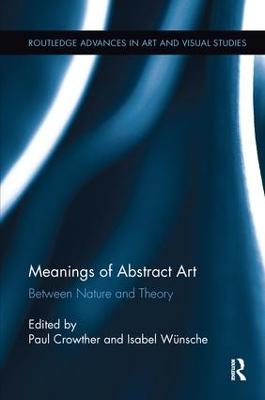 Between Nature and Theory

Traditional art is based on conventions of resemblance between the work and that which it is a representation "of". Abstract art, in contrast, either adopts alternative modes of visual representation or reconfigures mimetic convention. This book explores the relation of abstract art to nature (taking nature in the broadest sense-the world of recognisable objects, creatures, organisms, processes, and states of affairs).

Abstract art takes many different forms, but there are shared key structural features centered on two basic relations to nature. The first abstracts from nature, to give selected aspects of it a new and extremely unfamiliar appearance. The second affirms a natural creativity that issues in new, autonomous forms that are not constrained by mimetic conventions. (Such creativity is often attributed to the power of the unconscious.)

Other Editions - Meanings of Abstract Art by Paul Crowther » Have you read this book? We'd like to know what you think about it - write a review about Meanings of Abstract Art book by Paul Crowther and you'll earn 50c in Boomerang Bucks loyalty dollars (you must be a Boomerang Books Account Holder - it's free to sign up and there are great benefits!)

Paul Crowther is Chair of Philosophy at the National University of Ireland, Galway Isabel Wunsche is Professor of Art and Art History at Jacobs University, Bremen

A Preview for this title is currently not available.
More Books By Paul Crowther
View All

What Drawing and Painting Really Mean: The Phenomenology of Image and Gesture
$81.17 $81.99