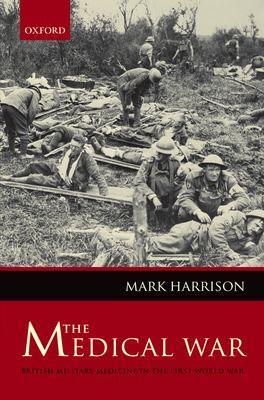 The Medical War describes the role of medicine in the British Army during the First World War. Mark Harrison argues that medicine played a vital part in the war, helping to sustain the morale of troops and their families, and reducing the wastage of manpower. Effective medical provisions were vital to the continuation of the war in all the major theatres, for both political and operational reasons.The Medical War is divided
more or less evenly between an analysis of medicine on the Western Front and selected campaigns in other theatres of the war, principally Mesopotamia, Gallipoli, Salonika, East Africa, and the Middle East. It explores
preventive medicine and casualty disposal and treatment, attempting to view these not only from the perspective of medical personnel but also from that of commanders, patients, politicians, and the general public. In providing this wide-ranging geographical and thematic coverage of medicine, The Medical War is unique among books on medicine in the First World War. It also differs from existing work in considering the British Army's medical responsibilities for non-British troops and
labourers, principally those of the Indian Army and various colonial labour detachments.

» Have you read this book? We'd like to know what you think about it - write a review about Medical War book by Mark Harrison and you'll earn 50c in Boomerang Bucks loyalty dollars (you must be a Boomerang Books Account Holder - it's free to sign up and there are great benefits!)

Mark Harrison is Professor of the History of Medicine and Director of the Wellcome Unit for the History of Medicine at the University of Oxford. He is the author of many books and articles on the history of medicine, war and imperialism, and on the history of disease. He currently holds a fellowship at Green Templeton College and is a Fellow of the Royal Historical Society. He is winner of the Templer Medal Book Prize, awarded by the Society for Army Historical Research in 2005 for Medicine and Victory: British Military Medicine in the Second World War.