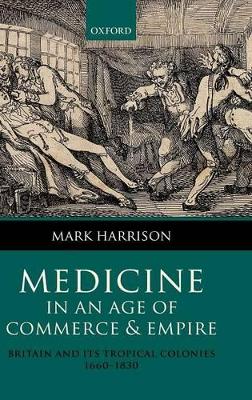 Medicine in an age of Commerce and Empire

Medicine in an age of Commerce and Empire explores the impact of commercial and imperial expansion on British medicine from the late seventeenth century to the early nineteenth century. Concentrating largely (though not exclusively) on India and the West Indies, it shows how medical practitioners in the colonies began to develop an empirical and experimental approach to medicine that was in many respects in advance of that in Britain. By the late eighteenth
and early nineteenth century, colonial ideas and practices had also begun to transform medicine in Britain. Medical practitioners in the Army, Navy, and East India Company used their knowledge of fevers and
other common diseases to establish themselves at the centre of British medicine, speaking to growing concerns about supposedly new diseases at home and fears about the invasion of exotic maladies. Some found employment in new institutions such as fever hospitals, while others used connections in the armed forces to acquire influence and status at home. Many also made their voice heard through religious networks such as circles of dissenting physicians and natural philosophers.

Buy Medicine in an age of Commerce and Empire by Mark Harrison from Australia's Online Independent Bookstore, Boomerang Books.

» Have you read this book? We'd like to know what you think about it - write a review about Medicine in an age of Commerce and Empire book by Mark Harrison and you'll earn 50c in Boomerang Bucks loyalty dollars (you must be a Boomerang Books Account Holder - it's free to sign up and there are great benefits!)

Mark Harrison is Professor of the History of Medicine and Director of the Wellcome Unit for the History of Medicine at the University of Oxford. He is the author of many books and articles on the history of medicine, war and imperialism, and on the history of disease. He currently holds a fellowship at Green Templeton College and is a Fellow of the Royal Historical Society. He is winner of the Templer Medal Book Prize, awarded by the Society for Army Historical Research in 2005 for Medicine and Victory: British Military Medicine in the Second World War.