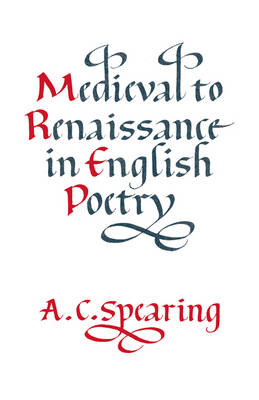 Medieval to Renaissance in English Poetry

Description - Medieval to Renaissance in English Poetry by A. C. Spearing

This is the first critical book to study in depth the transition from the 'medieval' to the 'Renaissance' periods in English literature. What exactly, in a literary context, do those terms designate? Mr Spearing argues that, far from being fixed determinants, they demand careful critical reappraisal. He rewrites the literary history of the period from Chaucer to the early Spenser in a way that puts new emphasis on the importance of Chaucer's influence on a tradition which in many important respects began with him. Many literary and cultural qualities, normally considered 'Renaissance', can be seen to have their origins, so far as the English tradition is concerned, in Chaucer's contacts with Italian culture. This book shows how Chaucer can be regarded as a Renaissance poet whose work was medievalised by his admiring successors. Traditions other than the Chaucerian are examined in this light, and the author engages with the larger problems of literary history through the detailed analysis of specimen texts.

Book Reviews - Medieval to Renaissance in English Poetry by A. C. Spearing

» Have you read this book? We'd like to know what you think about it - write a review about Medieval to Renaissance in English Poetry book by A. C. Spearing and you'll earn 50c in Boomerang Bucks loyalty dollars (you must be a Boomerang Books Account Holder - it's free to sign up and there are great benefits!)


A Preview for this title is currently not available.
More Books By A. C. Spearing
View All