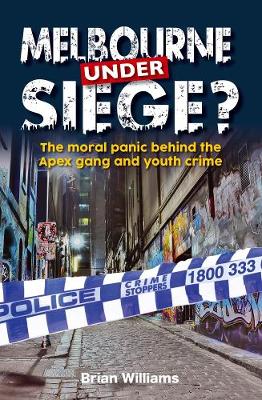 Melbourne Under Siege: The Moral Panic Behind the Apex Gang and Youth Crime

Description - Melbourne Under Siege: The Moral Panic Behind the Apex Gang and Youth Crime by Brian Williams

Melbourne Under Siege is an explosive book that captures the crimes that have Melbourne feeling shocked to their core and the traditionally sedate city of Melbourne has often found herself in the national and international news for all the wrong reasons.

During the ensuing media firestorm, there was not only relentless reporting on the terrifying `Apex-like' crimes, but the furore also soon morphed into emotional debates about youth crime in general, putting the anti-social activities of other alleged gangs such as the `YCW' (Young Crucified Warriors), `Islander 23' and `MTS' (Menace to Society) under the public spotlight.

This book covers the crimes and the levels of of violence, randomness and brazenness - home invasions, car jackings, assaults, personal thefts, shop smash and grabs, vandalism and public brawls.

It also discusses the police and government involvement and weighs in on the justice system and the background of these gangs and their crimes.These offenders may be a minority, but they are a minority that need to be addressed and stopped.

Unsurprisingly, the response to the youth gang problems have been extremely controversial and varied. Complex questions about the interpretation of crime statistics, justice, education and assimilation are inevitably raised.

Book Reviews - Melbourne Under Siege: The Moral Panic Behind the Apex Gang and Youth Crime by Brian Williams

» Have you read this book? We'd like to know what you think about it - write a review about Melbourne Under Siege: The Moral Panic Behind the Apex Gang and Youth Crime book by Brian Williams and you'll earn 50c in Boomerang Bucks loyalty dollars (you must be a Boomerang Books Account Holder - it's free to sign up and there are great benefits!)


A Preview for this title is currently not available.
More Books By Brian Williams
View All