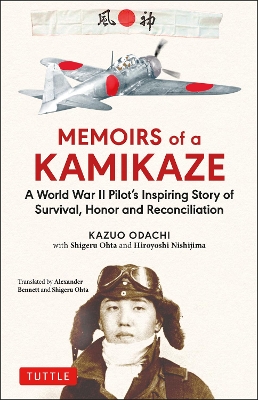 Memoirs of a Kamikaze: A World War II Pilot's Inspiring Story of Survival, Honor and Reconciliation

Description - Memoirs of a Kamikaze: A World War II Pilot's Inspiring Story of Survival, Honor and Reconciliation by Kazuo Odachi

This book tells the story of Kazuo Odachi who - in 1943, when he was just 16 years-old-joined the Imperial Japanese Navy to become a pilot. A year later, he was unknowingly assigned to the Kamikaze Special Attack Corps - a group of airmen whose mission was to sacrifice their lives by crashing planes into enemy ships. Their call sign was 'ten dead, zero alive.'

By picking up Memoirs of a Kamikaze, readers will experience the hardships of fighter pilot training - dipping and diving and watching as other trainees crash into nearby mountainsides. They'll witness the psychological trauma of coming to terms with death before each mission, and breathe a sigh of relief with Odachi when his last mission is cut short by Japan's eventual surrender. They'll feel the anger at a government and society that swept so much of the sacrifice under the rug in its desperation to rebuild.

Odachi's innate 'samurai spirit' carried him through childhood, WWII and his eventual life as a kendo instructor, police officer and detective. His attention to detail, unwavering self-discipline and impenetrably strong mind were often the difference between life and death. Odachi, who is now well into his nineties, kept his Kamikaze past a secret for most of his life. Seven decades later, he agreed to sit for nearly seventy hours of interviews with the authors of this book - who know Odachi personally. He felt it was his responsibility to finally reveal the truth about the Kamikaze pilots: that they were unsuspecting teenagers and young men asked to do the bidding of superior officers who were never held to account.

'WWII kamikaze pilot Odachi relates his experiences as a survivor of multiple suicide missions in this eye-opening and informative account...Enhanced with helpful historical sidebars and footnotes, Odachi's memoir humanises a much-mythologised aspect of the war in the Pacific. WWII history buffs and Japanophiles will savour the many insights.' - Publishers Weekly

'In preparing the English edition, Ohta and Bennett took great care to provide context to help international audiences understand the historical and cultural background of Odachi's story. Augmented by the meticulously researched details, the focus is fixed on telling Odachi's life in his own words. While the subject matter is often heavy, the text is laced with humorous anecdotes and wry comments, allowing Odachi's personality to come through.' - The Japan Times

'...expertly translated...Odachi provides personal insight on the last days of empire, and his stories of crime in Tokyo give this memoir life. This book deserves a spot next to Yasuo Kawahara's classic autobiography Kamikaze.' - Library Journal

» Have you read this book? We'd like to know what you think about it - write a review about Memoirs of a Kamikaze: A World War II Pilot's Inspiring Story of Survival, Honor and Reconciliation book by Kazuo Odachi and you'll earn 50c in Boomerang Bucks loyalty dollars (you must be a Boomerang Books Account Holder - it's free to sign up and there are great benefits!)