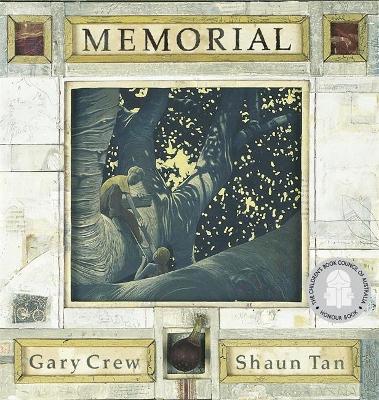 When the soldiers return from the Great War in 1918, a memorial tree is planted . . . 'Lest We Forget'. But generations later, what do those who pause in the shadows of the tree's immense branches remember?Years on, the tree has grown to be huge and unruly, dislodging the statue next to it and creating a traffic hazard in what is now a much larger, busier town. A decision is made by a local council to cut the tree down . . . MEMORIAL serves as a reminder of the lessons to be gained from the past and examine the significance of Anzac Day, conservation, respect and remembrance.The beautiful and poignant CBCA Honour Book MEMORIAL is now part of LOTHIAN AUSTRALIAN FAVOURITES, a collection of the very best Australian picture books.

Other Editions - Memorial by Gary Crew » Have you read this book? We'd like to know what you think about it - write a review about Memorial book by Gary Crew and you'll earn 50c in Boomerang Bucks loyalty dollars (you must be a Boomerang Books Account Holder - it's free to sign up and there are great benefits!)

Gary Crew (Author) Gary Crew is well known for his rich, multi-layered and intensely suspenseful bestselling novels for young adults. Four times the winner of the CBCA Book of the Year Award, as well as numerous other awards, Gary was a high school English teacher for eighteen years, before turning to university lecturing and full-time writing. He lives in Queensland. Shaun Tan (Illustrator) Shaun Tan grew up in Perth and graduated from the University of Western Australia with joint honours in Fine Arts and English Literature. He began drawing and painting images for science fiction and horror stories in small-press magazines as a teenager, and has since become best known for illustrated books that deal with social, political and historical subjects through surreal, dream-like imagery. His works include The Red Tree, The Lost Thing, Rules of Summer and the acclaimed wordless novel The Arrival. All have been widely translated throughout Europe, Asia and South America, and are enjoyed by readers of all ages. Shaun has also worked as a theatre designer and a concept artist for the films Horton Hears a Who and Pixar's WALL-E and in 2011, he shared an Academy Award for his work on the animated short film based on his book, The Lost Thing. In that same year, he won the Dromkeen Medal for services to children's literature and the Astrid Lindgren prize, the world's richest children's literature award. For more information visit shauntan.net