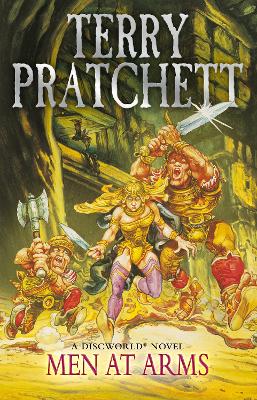 'Funny, wise and mock heroic . . . The funniest and best crafted book I have read all year' Sunday Express

'What's so hard about pulling a sword out of a stone? The real work's already been done. You ought to make yourself useful and find the man who put the sword in the stone in the first place.'

And they need all the help they can get, because someone in Ankh-Morpork has been getting dangerous ideas - about crowns and legendary swords, and destiny.

And the problem with destiny is, of course, that she is not always careful where she points her finger. One minute you might be minding your own business on a normal if not spectacular career path, the next you might be in the frame for the big job, like saving the world . . .
__________________

The Discworld novels can be read in any order but Men At Arms is the second book in the City Watch series.

Other Editions - Men At Arms by Terry Pratchett 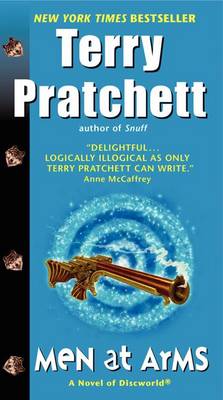 » Have you read this book? We'd like to know what you think about it - write a review about Men At Arms book by Terry Pratchett and you'll earn 50c in Boomerang Bucks loyalty dollars (you must be a Boomerang Books Account Holder - it's free to sign up and there are great benefits!)