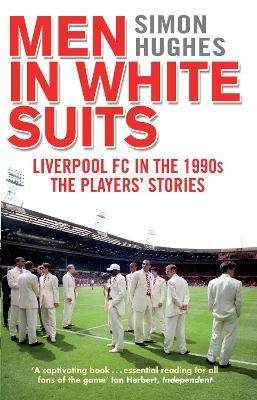 Liverpool FC in the 1990s - The Players' Stories

The fascinating inside story behind the decline of Liverpool FC in the 1990s, as told by a host of influential characters associated with the team during this tumultuous period in the club's history.

In Men in White Suits, Simon Hughes meets some of the most colourful characters to have played for Liverpool Football Club during the 1990s.

The resulting interviews, set against the historical backdrop of both the club and the city, deliver a rich portrait of life at Anfield during a decade when on-field frustrations were symptomatic of off-the-field mismanagement and ill-discipline.

After the shock resignation of Dalglish and Graeme Souness's ill-fated reign, the Reds - under the stewardship of Roy Evans - displayed a breathtaking style led by a supremely talented young group of British players whose names featured as regularly on the front pages of the tabloids as they did on the back. The Daily Mail was the first newspaper to tag Evans's team as the Spice Boys.

Yet despite their flaws, this was a rare group of individuals- mavericks, playboys, goal-scorers and luckless defenders. Wearing off-white Armani suits, their confident personalities were exemplified in their pre-match walk around Wembley before the 1996 FA Cup final (a 1-0 defeat to Manchester United).

In stark contrast to the media-coached, on-message interviews given by today's top stars, the blunt, ribald and sometimes cutting recollections of the footballers featured in Men in White Suits provide a rare insight into this fascinating era in Liverpool's long and illustrious history.

Other Editions - Men in White Suits by Simon Hughes 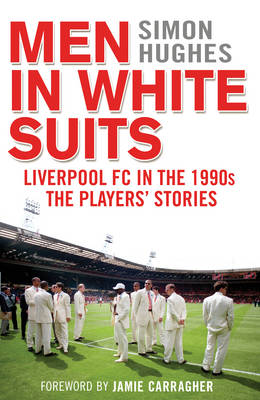 » Have you read this book? We'd like to know what you think about it - write a review about Men in White Suits book by Simon Hughes and you'll earn 50c in Boomerang Bucks loyalty dollars (you must be a Boomerang Books Account Holder - it's free to sign up and there are great benefits!)

Simon Hughes is a journalist and author. He writes for the Daily Telegraph, Sunday Telegraph and The Independent, as well as Liverpool Football Club's official magazine. Red Machine won the Antonio Ghirelli prize for Italian soccer foreign book of the year in 2014. His other titles include Secret Diary of a Liverpool Scout and The Torres Story. Simon's latest book, Men in White Suits- Liverpool in the 1990s, the Players' Stories is the inside story behind the decline of Liverpool FC, as told by a host of influential characters associated with the team during this tumultuous period in the club's history.

A Preview for this title is currently not available.
More Books By Simon Hughes
View All