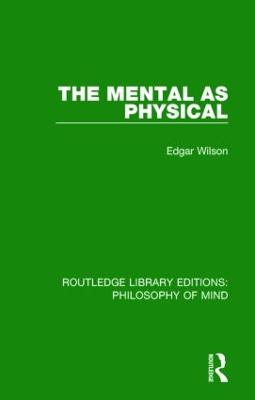 The Mental as Physical

Description - The Mental as Physical by Edgar Wilson

The central theme of this impressively argued study is that the mental and physical are identical. Drawing heavily on recent scientific research into the mind-brain relationship, Dr Wilson argues that human mentality, rationality and purposefulness are phenomena which come within the compass of scientifically based explanation. The consequences of this thesis are enormous both in relation to the controversies about reasons and causes as explanations of human behaviour, and, more important, to the problems of free will, moral responsibility, penal philosophy, ethics and the law. The book argues that free will is a misconceived idea and that our notions of moral responsibility need radical revision. The book is of considerable relevance not only to academic philosophy but also to scientists and jurisprudents interested in the implications of this study. Originally published in 1979.

Other Editions - The Mental as Physical by Edgar Wilson 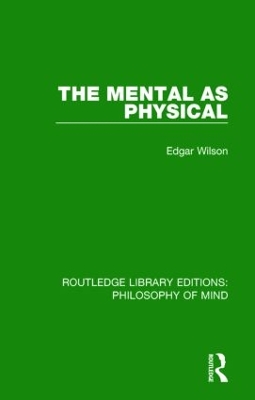 Book Reviews - The Mental as Physical by Edgar Wilson

» Have you read this book? We'd like to know what you think about it - write a review about Mental as Physical book by Edgar Wilson and you'll earn 50c in Boomerang Bucks loyalty dollars (you must be a Boomerang Books Account Holder - it's free to sign up and there are great benefits!)


A Preview for this title is currently not available.
More Books By Edgar Wilson
View All