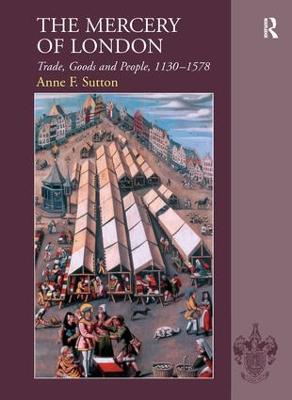 The Mercery of London

Description - The Mercery of London by Anne F. Sutton

Although mercers have long been recognised as one of the most influential trades in medieval London, this is the first book to offer a comprehensive and detailed analysis of the trade from the twelfth to the sixteenth century. The variety of mercery goods (linen, silk, worsted and small manufactured items including what is now called haberdashery) gave the mercers of London an edge over all competitors. The sources and production of all these commodities is traced throughout the period covered. It was as the major importers and distributors of linen in England that London mercers were able to take control of the Merchant Adventurers and the export of English cloth to the Low Countries. The development of the Adventurers' Company and its domination by London mercers is described from its first privileges of 1296 to after the fall of Antwerp. This book investigates the earliest itinerant mercers and the artisans who made and sold mercery goods (such as the silkwomen of London, so often mercers' wives), and their origins in counties like Norfolk, the source of linen and worsted. These diverse traders were united by the neighbourhood of the London Mercery on Cheapside and by their need for the privileges of the freedom of London. Extensive use of Netherlandish and French sources puts the London Mercery into the context of European Trade, and literary texts add a more personal image of the merchant and his preoccupation with his social status which rose from that of the despised pedlar to the advisor of princes. After a slow start, the Mercers' Company came to include some of the wealthiest and most powerful men of London and administer a wide range of charitable estates such as that of Richard Whittington. The story of how they survived the vicissitudes inflicted by the wars and religious changes of the sixteenth century concludes this fascinating and wide-ranging study.

Other Editions - The Mercery of London by Anne F. Sutton Book Reviews - The Mercery of London by Anne F. Sutton

» Have you read this book? We'd like to know what you think about it - write a review about Mercery of London book by Anne F. Sutton and you'll earn 50c in Boomerang Bucks loyalty dollars (you must be a Boomerang Books Account Holder - it's free to sign up and there are great benefits!)

Anne F. Sutton is Historian Emerita to the Mercers' Company of London, UK.

A Preview for this title is currently not available.
More Books By Anne F. Sutton
View All