One Brit in Brussels. Two French Women. And a whole lot of merde.
The hilarious novel from Stephen Clarke, bestselling author of A Year in the Merde and A Thousand Years of Annoying the French.

An Englishman, Paul West, goes to Brussels to work for a French MEP. There he gets an insider's view of what really goes on in the massive madhouse that is the EU Parliament. With the referendum on the horizon, things are even more hysterical than usual.

When the Brexit result comes in, Paul has to make a decision. If he wants to work in Europe, should he apply for a French passport?

And as Paul contemplates his own personal Brexit, the whole of Brussels seems to be going into meltdown ...

Other Editions - Merde in Europe by Stephen Clarke 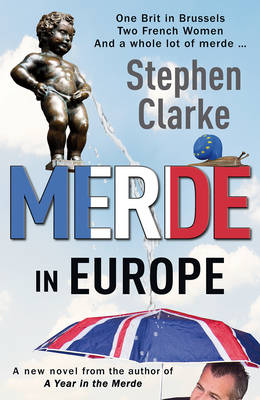 » Have you read this book? We'd like to know what you think about it - write a review about Merde in Europe book by Stephen Clarke and you'll earn 50c in Boomerang Bucks loyalty dollars (you must be a Boomerang Books Account Holder - it's free to sign up and there are great benefits!)

Stephen Clarke lives in Paris, where he divides his time between writing and not writing. His five Merde novels, A Year in the Merde, Merde Actually, Merde Happens, Dial M for Merde and The Merde Factor have been bestsellers all over the world - including France. Stephen also writes non-fiction books, which include Talk to the Snail, an insider's guide to understanding the French, How the French Won Waterloo or Think They Did, an amused look at France's continuing obsession with Napoleon, Dirty Bertie, the story of King Edward VII's youthful follies in France, and 1000 Years of Annoying the French, which was a number one bestseller in Britain. Research for Stephen's novels has taken him all over Europe and America.

A Preview for this title is currently not available.
More Books By Stephen Clarke
View All