The easy way to make smart business transactions
Are you a business owner, investor, venture capitalist, or member of a private equity firm looking to grow your business by getting involved in a merger with, or acquisition of, another company? Are you looking for a plain-English guide to how mergers and acquisitions can affect your investments? Look no further.
Mergers & Acquisitions For Dummies explains the entire process step by step-from the different types of transactions and structures to raising funds and partnering. Plus, you'll get expert advice on identifying targets, business valuation, doing due diligence, closing the purchase agreement, and integrating new employees and new ways of doing business.

How to take advantage of high-value deals

Going beyond the case studies of other books, Mergers & Acquisitions For Dummies is your one-stop reference for making business growth a success.

Other Editions - Mergers & Acquisitions For Dummies by Bill Snow 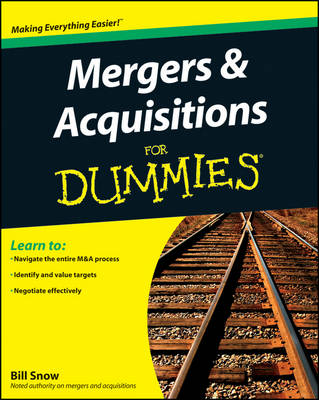 » Have you read this book? We'd like to know what you think about it - write a review about Mergers & Acquisitions For Dummies book by Bill Snow and you'll earn 50c in Boomerang Bucks loyalty dollars (you must be a Boomerang Books Account Holder - it's free to sign up and there are great benefits!)


A Preview for this title is currently not available.
More Books By Bill Snow
View All