Meshes of the Afternoon

Description - Meshes of the Afternoon by John David Rhodes

Meshes of the Afternoon (1943), filmed by Maya Deren and her then husband Alexader Hammid in their bungalow above Sunset Boulevard for a mere $274.90, is the most important film in the history of American avant-garde cinema. The artistic collaboration between Deren and Hammid finds its distorted reflection in the vision of the film's tormented female protagonist. Its focus - through a series of intricate and interlocking dream sequences - on female experience and the domestic sphere links Meshes to the Hollywood melodramas of the period, while its unsettling atmosphere of dread, death and doubles makes it a counter-cinematic cousin to film noir. The film has influenced not only the subsequent history of experimental film, but also on the work of Hollywood auteurs. It is a touchstone of women's film-making, of modern cinema and of modern art.

John David Rhodes traces the film's history back into the lives of Maya Deren and Alexander Hammid, but in particular that of Deren. He reads the film as a culmination of Deren's abiding interest in modernism and her intense engagement in socialist politics. Rhodes argues that while the film remains a powerful point of reference for feminist film-makers and experimentalists, it is also an example of political art in the broadest terms.

In his foreword to this new edition, Rhodes reflects upon the film's continuing importance for and influence upon feminist and avant-garde filmmaking.

Other Editions - Meshes of the Afternoon by John David Rhodes 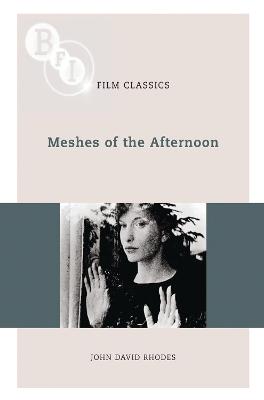 Book Reviews - Meshes of the Afternoon by John David Rhodes

» Have you read this book? We'd like to know what you think about it - write a review about Meshes of the Afternoon book by John David Rhodes and you'll earn 50c in Boomerang Bucks loyalty dollars (you must be a Boomerang Books Account Holder - it's free to sign up and there are great benefits!)


A Preview for this title is currently not available.
More Books By John David Rhodes
View All