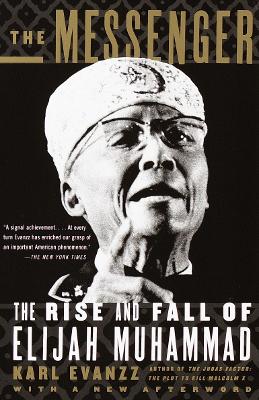 Drawn from recently declassified FBI files, and interviews with family members and former apostles, The Messenger renders a daring portrait of one of African-American history's most controversial leaders.

In this explosive biography, investigative journalist Karl Evanzz recounts the multidimensional life of a semiliterate refugee from the Jim Crow South who became the influential founder of the Nation of Islam. Considered the "Prophet" by his followers and a threat to national security by J. Edgar Hoover, Elijah Muhammad moved four million African Americans to convert to his heterodox version of Islam, and inspired the lives of Malcolm X, Muhammad Ali, Jesse Jackson, and Louis Farrakhan. But his increasingly insatiable hunger for power ultimately led Elijah Muhammad down a path of corruption, ultimately betraying his teachings and his devoted believers by womanizing, fathering thirteen illegitimate children, and abetting in the murders of those who criticized him, not least of whom, his chief disciple, Malcolm X.

» Have you read this book? We'd like to know what you think about it - write a review about Messenger book by Karl Evanzz and you'll earn 50c in Boomerang Bucks loyalty dollars (you must be a Boomerang Books Account Holder - it's free to sign up and there are great benefits!)

Karl Evanzz is an on-line editor at the Washington Post. He has appeared on The Oprah Winfrey Show, MSNBC, and Tony Brown's Black Journal as an authority on the Nation of Islam, Malcolm X, and Louis Farrakhan. He is the author of The Judas Factor: The Plot to Kill Malcolm X. He lives in suburban Washington, D.C. From the Hardcover edition.