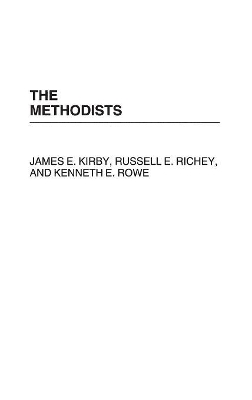 Description - The Methodists by James Kirby

Although this work takes proper notice of its origins in John Wesley's 18th-century movement in England, it assumes that in America the people called Methodists developed in distinctive fashion. The volume examines this American version, its organization, leadership, and form of training and incorporating new members. The authors treat Methodism as defined by conferences bound together by a commitment to episcopal leadership and animated by various forms of lay piety. Offering a fresh perspective based on sound, modern scholarship, this study will be of interest to scholars, students, and anyone interested in church history.

American Methodists early organized into conferences that defined Methodist space and time and served as the locus of power. At the same time, they created a strong episcopal form of church government, subject to the body of preachers in conference, but free to lead and direct the organization as a whole. This mission was clear, well understood, and suited to the ethos of a growing America-to spread scriptural holiness in the land and to create a desire to flee from the wrath to come. By the middle of the 19th century, Methodists in America had grown from an insignificant sect to America's largest Protestant group. Essential to that growth were structures and processes of lay involvement, particularly class meetings and Sunday schools.

Other Editions - The Methodists by James Kirby » Have you read this book? We'd like to know what you think about it - write a review about Methodists book by James Kirby and you'll earn 50c in Boomerang Bucks loyalty dollars (you must be a Boomerang Books Account Holder - it's free to sign up and there are great benefits!)

JAMES E. KIRBY is Professor of Church History at Southern Methodist University's Perkins School of Theology. His interests are in the history of Methodism and the American 19th century. He is currently working on a biography of Bishop William C. Martin, President of the National Council of Churches in 1952.RUSSELL E. RICHEY is Associate Dean for Academic Programs and Professor of Church History at The Divinity School at Duke University. His most recent books include Early American Methodism (1991) and Reimagining Denominationalism (1994).KENNETH E. ROWE is Professor of Church History at Drew University Theological School and Librarian of the United Methodist Archives and History Center. He is the author of United Methodist Studies: Basic Bibliographies (1992), of the multi-volume Methodist Union Catalog (1975 -) and editor with Richey of Perspectives on American Methodism (1993).

A Preview for this title is currently not available.
More Books By James Kirby
View All

Gerry Harvey : Business Secrets of Australia's Favourite Retailer
No Stock on Hand, Supplier Has No Due Date for Supply.
$22.46 $24.95