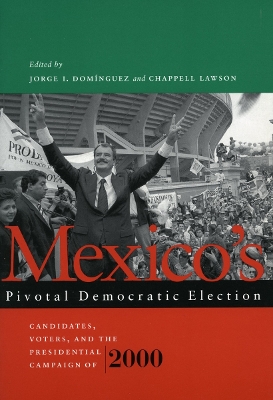 Candidates, Voters, and the Presidential Campaign of 2000

The 2000 Mexican presidential race culminated in the election of opposition candidate Vicente Fox and the end of seven decades of one-party rule. This book, which traces changes in public opinion and voter preferences over the course of the race, represents the most comprehensive treatment of campaigning and voting behavior in an emerging democracy. It challenges the "modest effects" paradigm of national election campaigns that has dominated scholarly research in the field.Chapters cover authoritarian mobilization of voters, turnout patterns, electoral cleavages, party strategies, television news coverage, candidate debates, negative campaigning, strategic voting, issue-based voting, and the role of the 2000 election in Mexico's political transition. Theoretically-oriented introductory and concluding chapters situate Mexico's 2000 election in the larger context of Mexican politics and of cross-national research on campaigns. Collectively, these contributions provide crucial insights into Mexico's new politics, with important implications for elections in other countries.

Other Editions - Mexico's Pivotal Democratic Election by Jorge I. Dominguez » Have you read this book? We'd like to know what you think about it - write a review about Mexico's Pivotal Democratic Election book by Jorge I. Dominguez and you'll earn 50c in Boomerang Bucks loyalty dollars (you must be a Boomerang Books Account Holder - it's free to sign up and there are great benefits!)

Jorge I. Dominguez is the Director of the Weatherhead Center for International Affairs at Harvard University. Chappell H. Lawson is Associate Professor of Political Science at MIT.