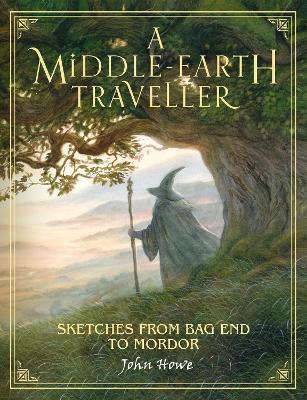 Sketches from Bag End to Mordor

Let acclaimed Tolkien artist John Howe take you on an unforgettable journey across Middle-earth, from Bag End to Mordor, in this richly illustrated sketchbook fully of previously unseen artwork, anecdotes and meditations on Middle-earth.

Middle-earth has been mapped, Bilbo's and Frodo's journeys plotted and measured, but it remains a wilderland for all that. The roads as yet untravelled far outnumber those down which J.R.R. Tolkien led us in his writings.

A Middle-earth Traveller presents a walking tour of Tolkien's Middle-earth, visiting not only places central to his stories, but also those just over the hill or beyond the horizon. Events from Tolkien's books are explored - battles of the different ages that are almost legend by the time of The Lord of the Rings; lost kingdoms and ancient myths, as well as those places only hinted at: kingdoms of the far North and lands beyond the seas.

Sketches that have an 'on-the-spot' feel to them are interwoven with the artist's observations gleaned from Tolkien's books as he paints pictures with his words as well as his pencil. He also recollects his time spent working alongside Peter Jackson on the Lord of the Rings and Hobbit film trilogies. Combining concept work produced for films, existing Middle-earth art and dozens of new paintings and sketches exclusive to this book, A Middle-earth Traveller will take the reader on a unique and unforgettable journey across Tolkien's magical landscape.

» Have you read this book? We'd like to know what you think about it - write a review about Middle-earth Traveller book by John Howe and you'll earn 50c in Boomerang Bucks loyalty dollars (you must be a Boomerang Books Account Holder - it's free to sign up and there are great benefits!)

John Howe was born in 1957 in Vancouver, Canada. He moved to France in 1976 and gained a Diploma in Illustration at the Ecole des Arts Decoratifs de Strasbourg in 1981. He has illustrated many French children's books, but is best known for his Tolkien calendars, book jackets, maps and posters. In 1998 he spent over a year in New Zealand working as Conceptual Artist on Peter Jackson's acclaimed The Lord of the Rings movie trilogy. In 2009 he returned to New Zealand to work on the The Hobbit movie trilogy.

A Preview for this title is currently not available.
More Books By John Howe
View All

The Emigrants' New Guide: Shewing a Description of the United States and the British Possessions of Canada, as Regards Climate, Soil, Productions, Laws & Customs, and the Best Places Pointed Out to Those Who Emigrate
$81.44 $90.49

Self-Dedication Discoursed in the Anniversary Thanksgiving of a Person of Honour for a Great Deliverance. by John Howe, M.A.
$39.12 $43.47