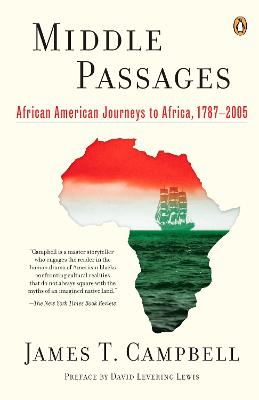 Many works of history deal with the journeys of blacks in bondage from Africa to the United States along the "middle passage," but there is also a rich and little examined history of African Americans traveling in the opposite direction. In Middle Passages, award-winning historian James T. Campbell vividly recounts more than two centuries of African American journeys to Africa, including the experiences of such extraordinary figures as Langston Hughes, W.E.B. DuBois, Richard Wright, Malcolm X, and Maya Angelou. A truly groundbreaking work, Middle Passages offers a unique perspective on African Americans' ever-evolving relationship with their ancestral homeland, as well as their complex, often painful relationship with the United States.

» Have you read this book? We'd like to know what you think about it - write a review about Middle Passages book by James T. Campbell and you'll earn 50c in Boomerang Bucks loyalty dollars (you must be a Boomerang Books Account Holder - it's free to sign up and there are great benefits!)

James T. Campbell, PhD, is professor of United States history and the Edgar E. Robinson Professor in United States history at Stanford University. Dr. Campbell earned his BA from Yale University and both his MA and PhD from Stanford University. He is the author of Race, Nation, and Empire in American History and Middle Passages: African American Journeys to Africa, 1787-2005. David Levering Lewis is the author of God's Crucible: Islam and the Making of Europe, 570-1215; W. E. B. Du Bois: Biography of a Race, 1868-1919; W. E. B. Du Bois: The Fight for Equality and the American Century, 1919-1963; and more. Lewis's work can be characterized as comparative history with interests in biography, civil rights, Europe and empire, and cultural politics. He is professor of history at New York University.

A Preview for this title is currently not available.
More Books By James T. Campbell
View All