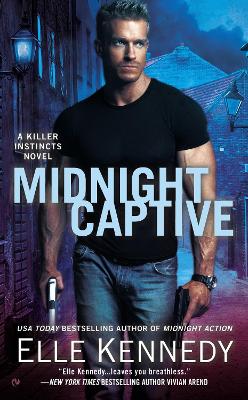 Former CIA agent Bailey Jones has spent months trying to forget her night of passion with mercenary Sean Reilly. An elite and methodical assassin, she has no room in her life for a reckless, rule-breaking Irishman, and she's vowed to steer clear of the tempting bad boy who lured her into his bed under false pretenses.

When Sean is implicated in the robbery of a Dublin bank, Bailey knows something isn't right. So what if she can't trust him? There's no way Sean would end up on the wrong side of the law. In fact, he's stuck in the middle of a dark and dirty conspiracy that could put his twin brother's life at risk with one wrong move. And Bailey's life too when she agrees to help.

As the stakes are raised and Bailey finds herself torn between two brothers, the fine line between danger and desire is crossed...and it'll take more than a killer instinct to survive.

Praise for the Killer Instincts novels-

'As sexy as it is exciting.'Joyfully Reviewed

» Have you read this book? We'd like to know what you think about it - write a review about Midnight Captive book by Elle Kennedy and you'll earn 50c in Boomerang Bucks loyalty dollars (you must be a Boomerang Books Account Holder - it's free to sign up and there are great benefits!)

Elle Kennedy, RITA Award-nominated author of the Killer Instincts novels, including Midnight Action and Midnight Pursuits, grew up in the suburbs of Toronto, Ontario, and holds a BA in English from York University. From an early age, she knew she wanted to be a writer and actively began pursuing that dream when she was a teenager. She loves strong heroines, alpha heroes, and just enough heat and danger to keep things interesting!

A Preview for this title is currently not available.
More Books By Elle Kennedy
View All